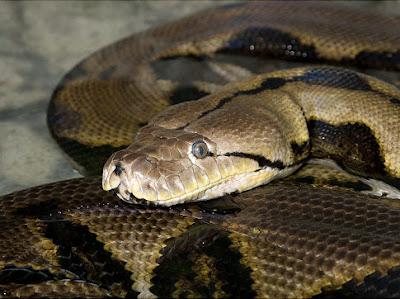 A 10-foot python found some shelter from the storm Sunday in the bathroom sink of a Brooklyn apartment, cops said.

A tenant on the seventh floor of the Howard Houses on Mother Gaston Blvd. in Brownsville complained to NYCHA employees that water was seeping through the ceiling about 9:50 a.m., cops said.

Workers showed up to check on the leak and found the water was coming from an apartment above on the eighth floor, but no one was home, police said.

The NYCHA workers got inside and found a pool of water in the bathroom, but retreated from the overflowing sink when they spotted the colossal reptile coiled in the porcelain basin, police said.

The shaken workers called the NYPD's Emergency Service Unit to remove the python, which is illegal to own as a pet in the city, cops said.

The 2-year-old snake was taken to a city Animal Care & Control shelter in Brooklyn, a spokesman and police said.

Staff at the AC&C were still taking in animals in response to Tropical Storm Irene, which left many homes underwater in parts of Queens and Staten Island, said spokesman Richard Gentles.

"There were animals rescued by AC&C and police during the storm and immediately after," Gentles said.

"We were responsible for the search and rescue of displaced pets."

Though there were more than 1,000 animals total in the Brooklyn and Manhattan shelters Sunday, most of them weren't there as a result of the the storm.

"We really didn't see a lot of lost pets," Gentles said, adding that the city provided apt warning for those living in areas prone to flooding.

"There was a lot of good messaging out there," Gentles said.

It was still not clear why the snake had been left in the apartment or if its owners faced any charges.

The building was not in an evacuation zone and did not experience any major flooding.