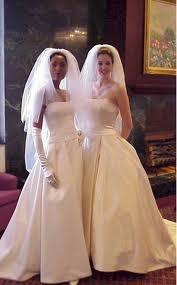 A New Jersey bridal salon is getting a surge of publicity, but perhaps not the kind it wanted. Here Comes the Bride is making news for refusing to sell a gown to a lesbian who plans to marry in neighboring New York, which legalized same-sex marriage earlier this summer.

Alex Genter has complained that the manager at Here Comes the Bride in Somers Point, N.J., lectured her about her gay lifestyle after Genter crossed out the word "groom" and replaced it with "partner" and her fiancee's name on paperwork she filled out for her planned purchase. "She said she wouldn't work with me because I'm gay," said Genter, according to the Philadelphia Daily News. "She also said that I came from a nice Jewish family, and that it was a shame I was gay. She said, 'There's right, and there's wrong. And this is wrong.' "

Genter visited Here Comes the Bride this month along with her parents and other family members for a day of dress-shopping, according to the article. She is planning to marry next summer in New York, which in June became the sixth state to legalize gay marriage.

The decision has prompted thousands of couples in neighboring states that don't recognize same-sex marriage, such as New Jersey, to plan their nuptials in New York. But as Bernadette Coveney-Smith, who specializes in planning gay weddings, explained last month to the Los Angeles Times, it can be a struggle for couples to find dress shops, florists and other vendors who are comfortable working with same-sex couples.

Since the New Jersey incident made news, Here Comes the Bride has been hammered by hundreds of scathing reviews on Yelp, and a Facebook page called Boycott Here Comes the Bride has attracted 433 followers. The woman who refused to work with Genter, and who has been identified as "Donna," told a Philadelphia Daily News columnist that she had indeed rejected Genter's business but accused the angry bride of "stirring up drama" by going public about the incident.

The Yelp reviews, meanwhile, have become so rabid that Yelp reportedly is considering removing those that don't abide by its policy of commenting on a business, not employees' beliefs.