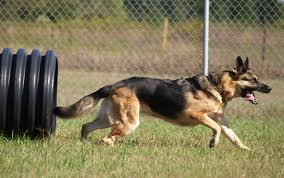 Man’s best friend – the friendly dog – also is terrorists' worst enemy when trained to defend Jews against attacks throughout Israel.

“The dogs really are friendly to their masters, but they are dangerous if you are a terrorist," according to Ben Yaakov. “We train these dogs to bite and detect terrorists.

They have prevented many terrorist attacks and could have prevented the Fogel murders” in Itamar earlier this year, when Rabbi Udi Fogel, his wife and thereof their six young children were brutally attacked by two Arab knife-wielding teenagers.

Ben Yaakov explains that using dogs against terror complements other defense measures, such as patrols, and implements the concept of preventing attacks instead of simply responding to them.

He adds that the IDF and police work often with his teams and that there never has been even one incident of wrongful use of the dogs.

His NGO also trains dogs for search and rescue missions by firefighters, police and rescue teams.