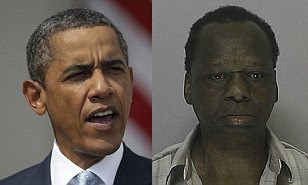 Framingham, MA - President Barack Obama’s uncle was stopped on suspicion of drunken driving, told police he planned to arrange bail through the White House and was being held without bail on an immigration detainer, authorities said Monday.

Onyango Obama was arrested last week in Framingham, about 20 miles west of Boston, after police said he made a rolling stop through a stop sign and nearly caused a cruiser to strike his sport utility vehicle.

Police said that after being booked at the police station, Obama was asked whether he wanted to make a telephone call to arrange for bail.

“I think I will call the White House,” he stated, according to a police report filed in Framingham District Court.

Police said Obama, who’s originally from Kenya and is the half-brother of the president’s late father, pleaded not guilty Friday and was being held without bail on a detainer from U.S. Immigration and Customs Enforcement. In a court document, ICE said he had an earlier deportation or removal order.

His immigration status couldn’t immediately be confirmed, but such orders are generally reserved for people living in the country illegally.

An immigration detainer, used by ICE to identify people in jail or prison who could be deported, is a request to another law enforcement agency to notify ICE before releasing the person from custody so ICE can arrange to take over custody.

A spokesman for ICE declined to comment on Obama’s immigration case, and the White House had no comment.

Obama, 67, was charged with operating under the influence of alcohol, negligent operation of a motor vehicle and failure to yield the right of way.

Michael Rogers, a spokesman for Cleveland immigration attorney Margaret Wong, said Wong will represent Obama. He confirmed that Obama is the half-brother of the president’s father and the brother of another relative, Zeituni Onyango, of Boston.

Onyango made headlines last year when she won the right to stay in the United States after an earlier deportation order. She came to the U.S. from Kenya in 2000 and was denied asylum by an immigration judge in 2004.

She stayed in the country illegally and was granted asylum last year by a judge who found she could be a target in Kenya not only for those who oppose the United States and the president but also for members of the Kenyan government.

Framingham police said Obama was arrested Wednesday after he failed to stop completely at a stop sign and a police officer had to quickly apply his brakes to avoid hitting Obama’s SUV.

Officer Val Krishtal said in a written report that Obama slurred his speech and became argumentative after he was told that he was being stopped because he had failed to fully stop and yield to traffic.

“I explained to him that I narrowly avoided striking his vehicle, and he told me that he did not hear my tires screeching so I was not being accurate,” Krishtal said in the report.

Obama originally told Krishtal he had nothing to drink but later said he had had two beers, Krishtal wrote in the report.

Krishtal said Obama failed several sobriety tests and blew a reading of 0.14 percent on a blood-alcohol breath test, which is above the state’s legal driving limit of 0.08 percent.

The president’s administration announced this month that it would allow many illegal immigrants facing deportation the chance to stay in the U.S. and apply for work permits and would focus on removing convicted criminals and people who might be national security or public safety threats.