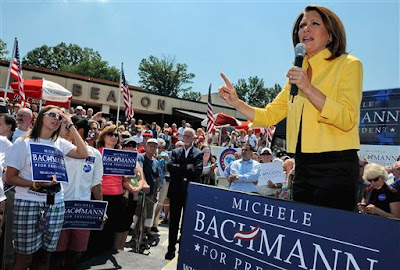 New York, NY - Republican presidential candidate Mitt Romney is facing a new challenge: He’s having trouble raising money from some Jewish donors who mistakenly believe one of his opponents, Michele Bachmann, is Jewish.

Some Jewish donors are telling fund-raisers for Romney, a Mormon, that while they like him, they’d rather open their wallets for the “Jewish candidate,” who they don’t realize is actually a Lutheran, The Post has learned.

“It’s a real problem,” one Romney fund-raiser said. “We’re working very hard in the Jewish community because of Obama’s Israel problem. This was surprising.”

Romney moved to quickly position himself as an alternative to Obama among well-heeled Jewish contributors in places like New York, New Jersey, Florida and California—a group Obama locked down in 2008.

Some in Romney’s camp have been wondering whether Bachmann and her allies are pushing the “Jewish” rumor to help their own fund-raising, sources said.

She has enjoyed strong popularity among Jewish voters and often talks about her stay on a kibbutz during the summer of 1974, when she was a teenager.

In a speech to the American Israel Political Action Committee last year, Bachmann recalled being guarded by soldiers while working on the kibbutz.

“While we were working, the soldiers were walking around looking for land mines,” she said. “I really learned a lot in Israel.”

She went on to say, “I am a Christian, but I consider my heritage Jewish, because it is the foundation, the roots of my faith as a Christian.”

Bachmann also told an AIPAC gathering earlier this year that she and her family make sure each year to attend at least one Jewish-theme play or movie.