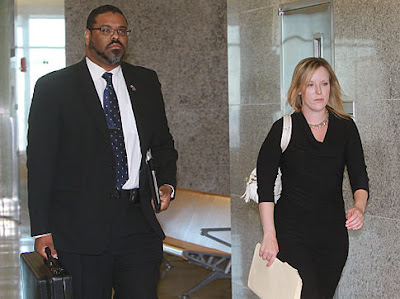 A Brooklyn judge slammed the lawyers of accused butcher Levi Aron, ripping them for their inexperience and their gripes about media coverage of the case.

In an unusual and hastily-called hearing Tuesday, Supreme Court Justice Neil Firetog grilled lawyers Pierre Bazile and Jennifer McCann about their legal chops. Had they been public defenders, Firetog said, he would have assigned more seasoned attorneys.

Replacing Bazile and McCann isn't an option, since they were hired privately.

"[I'm] concerned that counsels don't have the experience to try a complex case such as this," Firetog said. "My only concern is that the defendant gets a fair trial."

Bazile, 40, said he once assisted as a lawyer in a murder trial. McCann, 30, said she never tried a homicide case and has six total trials under her belt.

Their 35-year-old client is charged with abducting and murdering Borough Park boy Leiby Kletzky last month after the 8-year-old got lost and asked for help.

The brutal slaying shocked the city and Aron's lawyers have indicated they'll pursue an insanity defense.

The killer's confession and his psychiatric exam have been reported in the press and the Daily News published an exclusive jailhouse interview with him.

Firetog, an experienced jurist who hears mostly murder cases and once served as the court's administrative judge, was responding to the defense team's protests over the disclosures.

"The public has a right to see whatever is available," the judge said. "If you have a problem, you should have moved to preclude."

He also skewered the legal team for not restricting Aron's visitors list in Rikers.

"You claim your client is incompetent and you're relying on him to make decisions?" he said. "Please stop."
Aron, whose next scheduled court date is in a month, wasn't present for the legal bloodletting.

The judge chided the suspect's lawyers for griping about media coverage after giving several interviews themselves and posting comments about the case on McCann's Facebook page.

He even hinted that the defense may have been behind the illegal leak of the psych evaluation. McCann strongly denied that, noting that she called the reporter and prosecutors to find the source.

"The press is not going to disclose their source," Firetog replied. "One would think you'd know that. One would be surprised if you didn't know that."

The lawyer fired back that she would have asked for a hearing if she wanted the "delicious details" in the report to come out.

"This is such a disingenuous argument, I don't want to hear anymore," the judge said.