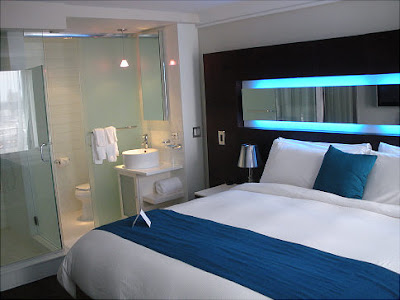 A trendy Brooklyn hotel generated a flood of cash from Irene, jacking up the price of a room to $999 a night on Saturday as the powerful storm zeroed in on New York, employees said.

Hotel Le Bleu on Fourth Ave. in Park Slope upped the rates from its typical $250 a night as people poured in looking for a dry place to rest.

"It was just because of high demand," said an employee, who would not give her name. "A lot of hotels did that."

But about 10 blocks away, at the Fairfield Inn & Suites on Third Ave., the rates remained unchanged from the usual $240 a night.

An employee at the Fairfield Inn said about 30% of the guests who arrived there Saturday night were people seeking shelter from Irene's torrential rains, but none of them was charged a premium rate.

A Hotel Le Bleu employee reached by phone, who would not give her name, said the high prices didn't slow business at the hotel with the distinctive exterior bathed in blue light.

"There was a lady that booked two nights at that rate."