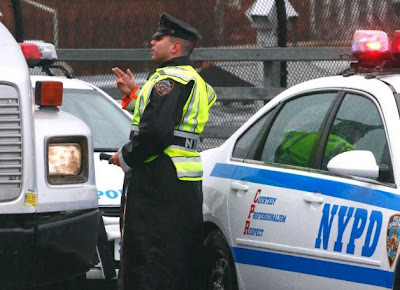 VALHALLA, N.Y. — Despite the park-like setting, with its wide lawn, old trees and pretty perennials, it's hard not to think of the 9/11 attack during a visit to the Kensico Dam in Westchester County.

A striking memorial to massacred county residents glints in the sunlight. The dam, which holds back billions of gallons of New York City drinking water and looms 130 feet above, has been viewed as a potential terrorist target ever since. Alongside it sits a police car, and a helicopter hovers above.

Those protective forces — the police car from New York City and the helicopter from Westchester County — illustrate a legacy of 9/11: teamwork between the city's and the suburbs' police forces.

Cooperation between the New York Police Department and the many smaller forces that surround the city has been transformed in the past 10 years and is much better suited to deal with major threats, officials throughout the area said.

"We're all in this together," New York City police Commissioner Ray Kelly told The Associated Press. "We're very much aware of the absolute necessity for us to work in partnership with local law enforcement agencies."

So hundreds of suburban officers now wear small radiation detectors that might catch a dirty bomb headed for Manhattan; Westchester County police scout and share information on potential targets that could affect New York City, like the dam and the Indian Point nuclear plant; officers from the entire metropolitan area take part in terrorism drills and briefings; and they have formed personal relationships that will improve emergency response, officials say.

"We're much closer than we were in the past," said Chief Inspector John Hodges of the Westchester County police, who is the NYPD's liaison. "I would say, before 9/11, if I talked to the NYPD once a year it was a lot."

Officials say cooperation should help detect activity in the region, like a bomb being built in the suburbs, that endangers the city; and reinforce protection of potential targets outside the city.

"The idea is to add rings of security," Hodges said. "What's changed since 9/11 is New York City has learned that people who might want to bring something into New York City will have to infiltrate from somewhere outside."

In the first World Trade Center attack in 1993, the London transit bombings in 2005 and last month's attack in Oslo, the bombs were built outside the cities and brought in through the suburbs, Kelly noted. That also applies to the failed car bomb found in Times Square last year.

"So we need eyes and ears around and outside of New York City to help us," Kelly said.

Among the collaborative programs is Securing the Cities, a federal Homeland Security program that started in 2006. Nearly $20 million has been appropriated to NYPD under the program this fiscal year.

The program paid for the radiation detectors, some of which are small enough to be worn on an officer's belt, and the NYPD gave hundreds of them to departments around the region.

"It's really a first in terms of the way these authorities have integrated response activities, what they've learned about technology and how they exercise together," said Warren Stern, director of Homeland Security's Domestic Nuclear Detection Office.

"From the outset, creating a regional approach and regional cooperation is one of the key objectives," he said.

"New York City knows it can't do all of this itself."

Other programs have police in the suburbs regularly checking on businesses such as hardware stores, beauty-supply wholesalers and storage facilities for sales or storage of chemicals that might go into a bomb. Robert Van Cura, chief of police in South Nyack and a member of a collaborative counterterror team, says suspicion about a storage unit in Orange County figured in the Newburgh Four case, in which four men were convicted for conspiracy to use weapons of mass destruction.

Police academy recruits are being taught that "borders are important only for paperwork," said Detective Sgt. William Leahy, who coordinates emergency preparedness in Nassau County.

The impact of 9/11 was regional from the start, said Lawrence Levy, executive dean of the National Center for Suburban Studies at Hofstra University.

"Maybe for a moment the attack validated suburbanites' belief that they were safer away from the city, but with all the funerals of the suburban firefighters and police officers and others who died at ground zero, people realized how tied they were to the central city," Levy said.

For a while, he said, city and suburb put aside their differences.

"Of course that didn't last the 10 years, but the one big thing to come out of it is the higher level of cooperation among law enforcement," Levy said. "That has lasted."

Denise Tribble of White Plains, a schoolteacher walking near the dam recently, said she's happy to know it's not just the NYPD that's alert for terrorist threats.

"The World Trade Center showed us that anything can happen to anyone at any time," she said.

Robert Polidore of Thornwood, 80 years old and retired, said police cooperation "probably should have been better even before, but I'm happy they're doing it."

The suburban agencies are quick to acknowledge that the extra work isn't just for New York City's benefit.

"I would have to say it's made suburban departments better," Hodges said. "It's given the officers a broader, more global perspective on what their mission is: not just their precinct or department but to protect this major metropolitan area."