Leonard John Egland is suspected in the deaths of four people 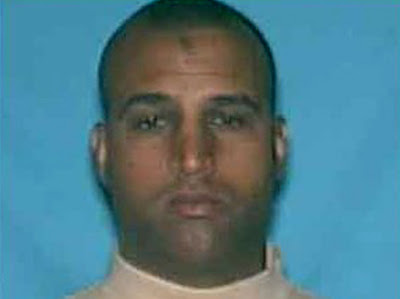 Cops in Pennsylvania are hunting for an Army captain suspected of killing four people and wounding two cops in a late-night shootout.

The Philadelphia Inquirer reported that SWAT teams had joined the search for Leonard John Egland, 37, after he was last seen early this morning on foot in Warwick Township, Pa.

Bucks County District Attorney David Heckler told The Associated Press on Sunday that he is being sought in the deaths of his ex-wife, her boyfriend and her boyfriend's young son in Virginia.

He is also being sought for the death of his mother-in-law in Buckingham.

The Inquirer said Heckler had returned from his third tour of duty overseas last week.

After the killings, Heckler drove his young daughter to a Quakertown, Pa. hospital where he tried to leave her and a note that hinted at suicide.

"Presumably he had grabbed his daughter from his ex-wife when he killed her," Heckler told the paper. At the hospital, "he asks to have her looked at, leaves a note and starts walking out."

The girl then reportedly told hospital workers that "grandmom went to heaven." Heckler took off after a hospital orderly confronted him. While on the run, he fired at police with a semi-automatic rifle, injuring two officers.

Officials are warning that he is armed and very dangerous.

"The question is, does he have other people on his list?" Heckler told the Inquirer. "If he drove up here to assassinate his mother-in-law, are there other targets?"