Rabbi Electrocuted while Trying to Save Child in Hurricane

The pavement was left scorched where downed electrical wires claimed the life of David Reichenberg, who saved a father and son.and As 6 year old Chaim Reuven David Herbst was rushed to the hospital, his yarmulkah with burn marks in it remained on the ground where he was burned by live wires. 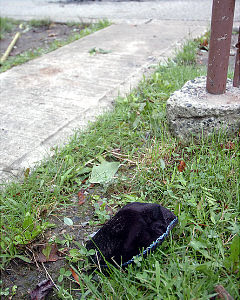 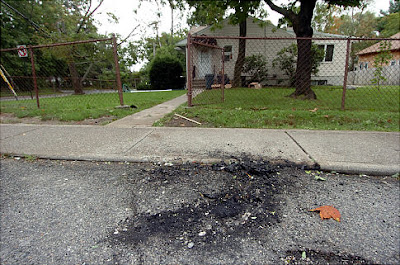 A good Samaritan was electrocuted Sunday when he rushed to rescue a father and son from a power line felled by Hurricane Irene, cops said.

About 20 firefighters and police helplessly stood by on a flooded Rockland County street, unable to get near David Reichenberg because of the live wire electrifying a puddle of water he had fallen into, a witness said.

Rescuers had to wait until Orange and Rockland Electric Co. workers cut the power to reach Reichenberg, 50, who died at the scene in Spring Valley, said witness Moishe Lichtenstein.

"When I got there the victim was on the ground and he was touching the wire, which was in the water," Lichtenstein said.

"When emergency officials got there, they couldn't touch him. We were standing there for like five or 10 minutes. We were just praying, 'God help this man,'" said Lichtenstein, 22, who monitors emergency scanner frequencies for NYbuff.org.

Reichenberg, who lived near the scene, was apparently driving home just after 11a.m. when he saw Reuven Herbst, 6, and his 43-year-old father in peril.

The courageous Reichenberg pulled the father, whose name was not immediately released, and the boy away , police said.

A relative said the father and son were looking for storm damage outside their house on Merrick Drive and Union Road when the boy touched a metal fence the live wire had fallen onto and a pool of water in the street next to it.

Reuven suffered severe burns to his hands and was being treated last night at Westchester Medical Center. The father was treated for minor burns caused when he tried to save his son, police said.

Melinda Miranda, 40, said the wire came down about 2 a.m. Sunday. She said she called 911 twice. "They came, but they didn't do anything."

She said she was awakened Sunday by a woman screaming. "I looked out the window, and saw the man on the floor," Miranda said, adding that smoke was rising off Reichenberg's body.