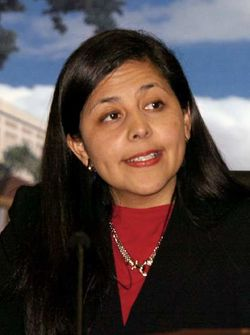 A Santa Ana city councilwoman apologized Thursday evening for comments she made at a meeting a day earlier in which she compared a downtown property owner to Hitler.

“What I said was inappropriate, and I let my emotions get the best of me,” Mayor Pro Tem Claudia Alvarez said by telephone.

Alvarez was referring to a comment she made at Wednesday’s council meeting during discussion of a controversial tax for downtown property owners. A portion of those taxes goes to Downtown Inc., an organization charged with promoting and securing the area.

“Hey, so if Hitler rents you a place, he’s giving us a great deal, so who cares what he stands for?” she said. “We need to put a stop to this.”

The comment referred to Irving Chase, who owns roughly four blocks downtown. He walked out of the meeting with his son, Ryan. Both of Irving Chase’s parents, Sol and Fay Chase, are Holocaust survivors from Poland.

Irving Chase said his father hid in the mountains with two Catholic families for almost four years. His mother made German army uniforms and spent time in Auschwitz. They lost more than 300 relatives in the Holocaust.

“I’m very, very sensitive to the Holocaust,” Irving Chase said. “That was the lowest thing that she could have said.”

Downtown Inc. is an organization that promotes downtown. It has been riddled with controversy in recent months, as property owners in the area say they don’t benefit from increased property taxes.

Ryan Chase is the president of the board of Downtown Inc. Until Thursday, Irving Chase was its secretary. He resigned because he didn’t want to interfere with the organization’s business after the councilwoman's remarks.

Alvarez's comments prompted condemnation by the Anti-Defamation League of Orange County/Long Beach. Kevin O’Grady, the director of the chapter, said the comments reinforce one of the oldest stereotypes surrounding people of Jewish descent: that of greed.

“I think it speaks to gross insensitivity,” he said of Alvarez's remarks. “I don’t think anybody deserves to be compared to Hitler unless they have actually led a genocidal campaign against people.”

Alvarez said getting emotional did not justify her statements. She said the debate has affected her personally because her father owned a business downtown, and the incident is the culmination of escalating tensions surrounding the downtown area.

“The conversation is not over,” she said. “I obviously need to learn how to keep my cool.”

When told about the apology, Irving Chase had no comment.