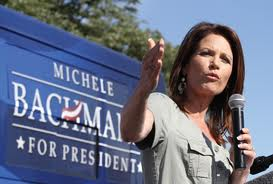 Irin Carmon reports on Bachmann's meaningful summer on a Negev kibbutz, which apparently helped shape part of her theology:

Years later, in a speech to AIPAC, Bachmann said of her time there, "We worked on the kibbutz from 4 am to noon. We were always accompanied by soldiers with machine guns. While we were working, the soldiers were walking around looking for land mines. I really learned a lot in Israel." She added, "I am a Christian, but I consider my heritage Jewish, because it is the foundation, the roots of my faith as a Christian."

I have deep worries about the negative ramifications of a certain type of Christian love for Israel (I wrote about this here), but it's always quite refreshing to hear a Christian embrace her religion's roots in Judaism, rather than deny those roots.