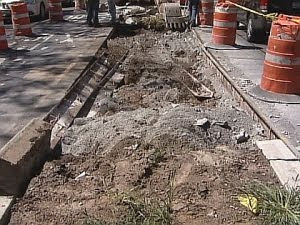 NEW YORK — It was a rare mea culpa from the New York City Department of Transportation.

On Tuesday it began jack-hammering traffic islands in Borough Park that, as CBS 2’s Marcia Kramer first reported some 10 months ago, blocked ambulances, fire trucks and other emergency vehicles.

Not that New Yorkers should gloat, but they won.

In a first for the city, construction trucks were actually digging out and getting rid of DOT Commissioner Janette Sadik-Khan’s cherished traffic island projects — a dangerous project Kramer reported on last November.

“Thank you for taking it away. We said thanks, but no thanks,” Borough Park resident Yiddi Nusenzweig said Tuesday.
“I feel great that they’re taking it down, that the ambulances will be able to go through and people’s lives will be saved. Less people are going to get killed over this,” resident Abe Hertzberg added.

When Kramer first reported this story, she showed Ladder 114 having trouble rushing to a fire in Borough Park because it ran smack-dab into the DOT’s cement traffic islands, and how a traffic back-up forced another ambulance to swerve around the traffic islands and into oncoming traffic to reach the nearby Maimonides Hospital emergency room.

“This became an impediment to saving lives. This is just such a great victory,” Assemblyman Dov Hikind said. “What I’m saying to New Yorkers is if you don’t like your island or whatever it is that someone is doing in government because they think they know better than you — fight.”

Assemblyman Hikind joined the fight to get rid of the dangerous islands.

“Channel 2 News is responsible for helping us. It’s the truth,” Hikind said.

The owner of a local diner was among the celebrants.

Kramer: “When I first came here you told me I didn’t have a chance.”

Jimmy Giapoutzis: “You proved me wrong. You won. You’re right.”

Kramer asked a DOT Deputy Commissioner David Woloch if this was an example of people successfully fighting City Hall.

“I would say fighting City Hall. I think it’s an example of our agency and the community working together to try to improve an important corridor in the neighborhood,” Woloch said.

This is actually a double loss for the city. Not only did the DOT make a mistake, but the money from this boondoggle project can never be recovered. Assemblyman Hikind said the project cost several hundred thousand dollars. The DOT, however, said the number is much less. Either way, it’s going to cost more for once the project is ripped out; the streets will have to repaved and other traffic devices installed.