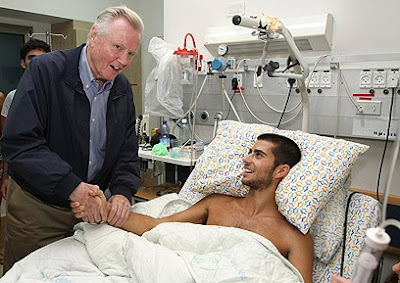 Hollywood actor Jon Voight visited Soroka Hospital in Beersheba Sunday in an effort to cheer up victims of the recent violence from Gaza – Thursday's terror attacks as well as the still ongoing rocket attacks that followed.

Voight, the father of starlet Angelina Jolie, is a longtime friend of the state. He has previously conducted visits in honor of Israel 60th Independence Day as well as two other occasions

He also wrote a letter to the US president following the 2010 Gaza flotilla, accusing him of abandoning Israel to violence. Voight also took part in a rally in Los Angeles which condemned Turkey for its part in the flotilla

The actor's current visit is sponsored by Chabad.

Voight told the victims that he was deeply saddened by the attacks, and that Israel needed its friends at this time. "The US should be Israel's best friend," he said, adding that the aim of the visit was to report back on the situation to the American public.

During my previous visit to Sderot I went looking for shelter, so I know the danger here is real," Voight told Ynet. "It is uncomfortable walking the streets here these days. I pray for all of you."

The celebrity visited critically wounded patients and their families, and was shocked to learn that the hospital was also treating Palestinians.

Voight said the world should know Israeli hospitals were treating terror victims alongside Palestinian patients from Gaza and Hebron, despite the shortage of medical resources.

People from abroad do not understand the reality in Israel until they come here," Voight concluded. "The American public thinks Israel is strong, tough, and smart, but needs to remember that it is also humane, vulnerable, and surrounded by enemies."