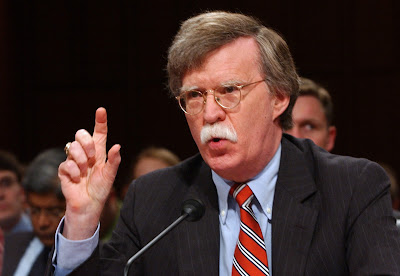 Bolton, who served as U.S. ambassador to the United Nations in the George W. Bush administration, was responding to an article in Foreign Policy magazine that quoted government sources claiming Israel had been granted access to airfields in Azerbaijan -- along Iran's northern border.

The article did not state exactly what the Israelis' intentions were, but it suggested it could point to a possible strike on Iran.

"I think this leak today is part of the administration's campaign against an Israeli attack," Bolton claimed on Fox News.

The White House did not respond to Bolton's claims Thursday.

But he said tipping the Israelis' hand by revealing "very sensitive, very important information" could frustrate such a plan.

Speaking afterward to FoxNews.com, Bolton said he didn't have hard proof that this was an intentional administration leak to halt an Israeli attack.

But he noted widely reported comments from Defense Secretary Leon Panetta in February that he thinks the Israelis could strike as early as April. If that's the case, Bolton said, then it would be "entirely consistent" for the administration to try to avoid that impending outcome.

The Foreign Policy article quoted what were identified as "high-level sources ... inside the U.S. government." It specifically mentioned "four senior diplomats and military intelligence officers."

One intelligence officer, who was unnamed, told the magazine that the U.S. was "watching" the activity and was "not happy about it."

The Foreign Policy article did not specify whether any of the information came from the White House, and there is no direct evidence that this was a coordinated leak.

"Clearly, this is an administration-orchestrated leak," Bolton told FoxNews.com. "This is not a rogue CIA guy saying I think I'll leak this out."

"It's just unprecedented to reveal this kind of information about one of your own allies," Bolton said.