Washington - US Asks Pope To Help In Alan Gross Case 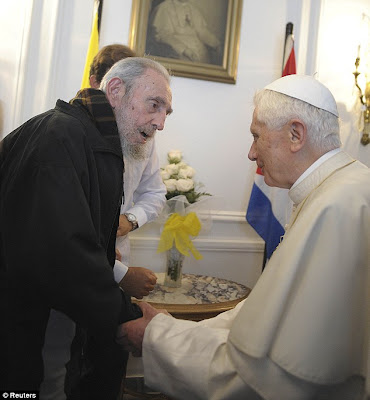 Washington - The Obama administration said Wednesday it had asked Pope Benedict XVI to raise with Cuban officials the case of American contractor Alan Gross, jailed on suspicion of espionage.

The State Department said the request was made directly to the Vatican and through the papal nuncio in Washington before the Pope arrived in Cuba this week.

“We obviously are hopeful that the pope will continue to be strong on all of the human rights issues in Cuba, religious freedom, and it would be a very, very good thing if the Cuban government were to take this opportunity to release Alan Gross,” spokeswoman Victoria Nuland said.

“We would be obviously very grateful were the the pope to raise this issue,” she told reporters.

Vatican spokesman Rev. Federico Lombardi said late Tuesday that the pontiff had made “requests of a humanitarian nature” to the Cuban government but did not know if individual cases were discussed.

He had no comment when asked about Alan Gross on Wednesday.

Gross is serving a 15-year prison sentence stemming from his work importing satellite and other communications equipment onto the island under a USAID-funded democracy-building program.

Cuba considers such programs to be attempts against its sovereignty, and he was convicted of crimes against the state.

Gross maintains that he was only trying to help Cuban Jews improve their Internet capability.
Posted by joe levin at 10:29 PM