Comedian Jackie Mason at an appearance in Queens. 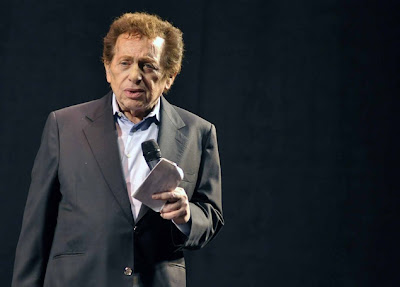 Comedian Jackie Mason’s girlfriend wasn’t laughing after her arrest in a Friday morning fight with the 75-year-old entertainer.

Kaoru Suzuki-McMullen was led from the Midtown North stationhouse in handcuffs and fishnet stockings after being charged with assaulting the veteran stand-up comic.

Mason’s 48-year-old girlfriend claimed that Mason had attacked her during a 6:30 a.m. argument inside his W. 56th St. apartment — but cops determined her story was bogus.

“He was arguing with her to leave the apartment,” a source told the Daily News. “He called down to the doorman on his phone. She took the phone from him, scratching and bruising his left wrist.”

Mason, star of the the hit Broadway one-man shows “The World According to Me” and “Politically Incorrect,” was not charged with any crime.

“I’m sorry, I can’t talk now,” Mason said after exiting the stationhouse with visible scratches on his arm. “I’m late.”

Suzuki-McMullen, wearing a low-cut black dress and black boots, emerged from the police station about an hour after Mason’s departure.

The 5-foot-7 suspect — who stands two inches taller than her senior citizen boyfriend — said nothing about what happened.

“There were allegations made — a dispute with Mr. Mason and a female companion, a dispute over a phone,” said Police Commissioner Raymond Kelly. “We’re going to sort this out.”

Two sources told The News that the woman claimed Mason had struck her during their argument. But she showed no apparent signs of injury, and police were skeptical of her version of events, the sources said.

Mason — a rabbi turned stand-up comic — has won Tony, Emmy and Ace awards for his work. Mason was briefly married to his manager during the 1990s.