This photograph, taken from a Twitter account the reportedly belonged to Trayvon, shows an older image of the teen -- just as new reporting are casting a different light on his behavior 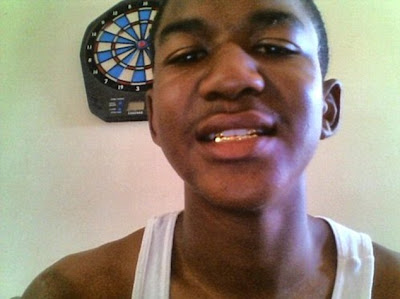 Trayvon Martin was suspended from school three times in the months before he was shot dead by a neighborhood watchman, it emerged today.

The new claims, revealed in a leaked report, paint a different picture of a teenager who frequently found himself in trouble with authorities.

The Miami Herald claims that in October, he was caught with a 'burglary tool' - a flathead screwdriver - and 12 pieces of women's jewellery.

Martin insisted that they did not belong to him. Earlier, he had been suspended for skipping school and showing up late to class.

And most recently, in February, he was suspended again when officials found a 'marijuana pipe' and an empty baggie with traces of the drug.

The fresh claims are likely to be seized upon by supporters of George Zimmerman who say the teenager launched an unprovoked attack on the neighbourhood watch volunteer moments before Trayvon was shot dead.

The revelation about the suspension in October, in a school report obtained by the Herald, was condemned today by Trayvon's family as part of a campaign to smear their dead son.

The boy's mother said: 'They killed my son and now they're trying to kill his reputation.

The conservative news site the Daily Caller and the blog the Wagist claim they have unearthed a Twitter account, which has since been taken down, that belonged to the teen.

Among many Tweets, the Wagist claims, is a message from his cousin implying that Trayvon attacked a bus driver.

'Yu ain't tell me yu swung on a bus driver,' a user Tweeted to Travyon's alleged account five days before he was killed.

The Daily Caller, says it has published 152 pages of tweets downloaded from Trayvon's account.

The site says Trayvon went by the Twitter handle NO_LIMIT_N***A. A few of the messages make reference to using drugs including one that says: 'Finna (I'm fixing to) smoke 1 wit my dawg wayne. But most are simply a take on daily life -- the same as most social media accounts.

Meanwhile, Joe Oliver, Zimmerman's longtime friend, told Good Morning America Monday that no matter how the case comes out -- even if the shooting is ruled justified -- 'George has virtually lost his life, too.

Mr Oliver said Zimmerman has gone into hiding and is in fear of his life over the public outcry for his arrest.

A fringe group, the New Black Panther Party, has offered a $10,000 reward for his 'capture. The boy’s parents say that they have never heard the claim about the screw driver and jewellery.

The October suspension was officially for graffiti, after he and some friends wrote ‘W.T.F.’ on a school locker.

According to an October report of the incident by the Miami Dade Schools Police, obtained by the Miami Herald, Trayvon never received any punishment for the jewellery because he said it was not his and it belonged to a friend. In total, he had 12 pieces of mostly women’s rings and earrings in his bag.

Instead, he was suspended on October 21for the graffiti charge. Ben Crump, a lawyer for Trayvon’s parents, said that they ‘never heard anything like this about a bag of jewellery….And anyway, it’s completely irrelevant to what happened February 26. ‘They never heard this, and don’t believe it’s true.

If it were true, why wouldn’t they call the parents? Why wasn’t he arrested? ‘We think everybody is trying to demonize him. The Martin family has admitted that the October suspension was his second, and that he had previously been suspended for tardiness and truancy.

The third, and arguably most serious suspension, came in February in the days leading up to his death. According to the Miami Herald, Miami-Dade Schools Police reported finding a bag with marijuana residue and a ‘marijuana pipe’ in the 17-year-old’s possession.

The boy was never criminally charged, but the Dr. Michael M. Krop Senior High School has a zero-tolerance policy when it comes to drug related incidents so he was suspended for an undisclosed amount of time.

Mr Crump said: ‘If he and his friends experimented with marijuana, that is completely irrelevant. What does it have to do with killing their son?’ After rallies and meetings all day Monday in Sanford, Florida, where the shooting occurred, Trayvon's parents are expected to appear on Capitol Hill Tuesday as the US Congress takes up the issue of racial profiling.

The unanimity against Zimmerman's shooting even crosses racial and lines. About 67 percent of whites support his arrest and 86 percent of non-whites.

Majorities of Republicans, Democrats and independents are all on the same page. At a Sanford City Council meeting Monday, which turned into a public forum on the Trayvon shooting, Rev Al Sharpton gave city leaders a petition with 2 million signatures of people calling for Zimmerman to be

Visit msnbc.com for breaking news, world news, and news about the economy
Posted by joe levin at 1:34 PM