Ambulance zaka after blast near grave of Rabbi Nachman 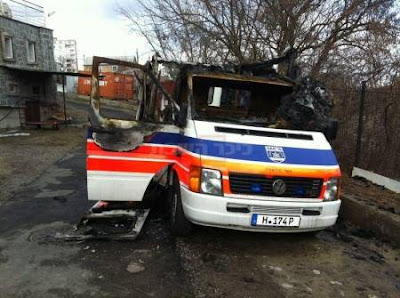 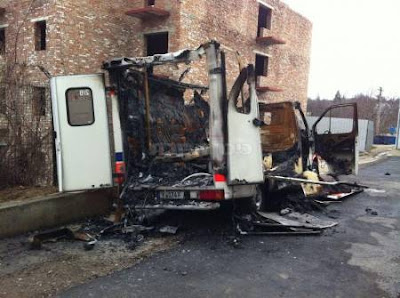 A blast destroyed an ambulance near the Uman grave of Rabbi Nachman. Police are investigating arson, but it may been accidental.

An explosion over the weekend destroyed a new ZAKA ambulance for visitors to the Uman grave of Rabbi Nachman of Breslov. Police are investigating possible arson, but the fire may have been an accident.

Breslov Jews in Uman said that frigid weather may have caused an oxygen balloon in the ambulance to explode, but police were asked to investigate the possibility of arson.

The ambulance was inaugurated last September for tens of thousands of Jews who make the annual Rosh HaShana New Year pilgrimage to the burial site of Rabbi Nachman, who sparked a revolution in the approach to inspire faith in Jews through Chassidic thought.

Interior Minister Eli Yishai, leader of the Shas Sephardi religious party, was on hand for the inauguration of the new ambulance.

Several Israeli political leaders have been trying to encourage Ukraine to cooperate with Israel and bring the grave and Rabbi Nachman’s remains to Israel for reburial.

Visits to Uman of Jews from all over the world have aided the Ukraine tourist economy, but anti-Semitism remains rampant in the country, where graves frequently are desecrated and where rabbis have been attacked.
Posted by joe levin at 7:45 AM