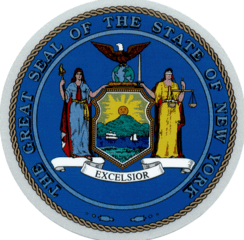 New York - The New York State housing commissioner, Darryl C. Towns, was arrested over the Fourth of July weekend on a charge of driving while intoxicated after he crashed his car in Westchester County, the police said.

Mr. Towns, a former state assemblyman and the scion of a powerful Brooklyn political family, spent the night in jail and has since made his initial court appearance on the charge.

A spokesman for Gov. Andrew M. Cuomo said Mr. Towns informed the governor’s office of his arrest the day it happened.

“Obviously it is disturbing news, but as this is an open and ongoing matter before the court, it would be inappropriate to comment further at this time,” the spokesman, Josh Vlasto, said in a statement.

Mr. Towns is the son of Representative Edolphus Towns, a Democrat, who last year won election to his 15th term.
Posted by joe levin at 7:24 AM