A look inside the NYPD's command center 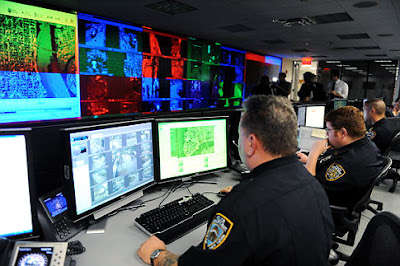 Police Commissioner Raymond Kelly said the so-called Ring of Steel technology has helped cops nab about 100 criminals in the subways in the past eight months alone.

Most of those bandits were collared for assault, purse-snatching and robbery. In one case, cops used aboveground cameras to retrace the steps of a suspect in a sexual assault as he walked from the crime scene back to his job, Kelly said.

The NYPD developed the Ring of Steel following 9/11, hoping it would become an important crimefighting tool, particularly in the battle against terrorism.

Since then, by adding cameras from businesses to the program, the fledgling system has been expanded greatly.

"The structure is in place to significantly increase the number of cameras at the right spots," Kelly said yesterday before cops led reporters on a tour of the system's command center in lower Manhattan.

The network was originally intended to run south from Canal St. and also cover midtown from river to river between 30th and 60th Sts.

Right now, there are about 1,800 closed-circuit cameras in place, divided equally between midtown and downtown.

When the system is completed, it will feature as many as 3,000 cameras, Kelly said.

The high-tech network cost about $200million, with the city contributing $8 million and the federal Department of Homeland Security footing the rest of the bill.

It has also proven effective in tracking down people who mistakenly leave a bag on a sidewalk - normally innocent moments of forgetfulness that must be treated seriously because of the terrorism threat, Kelly said.

The command center, perched in a skyscraper's penthouse, has a 40-foot-tall wall of television screens showing camera footage. In an adjacent area, there is a command center for monitoring radiation detectors from throughout the city.

Kelly said video footage will automatically be deleted unless it relates to a specific investigation.