Rabbi ‘should step down’ 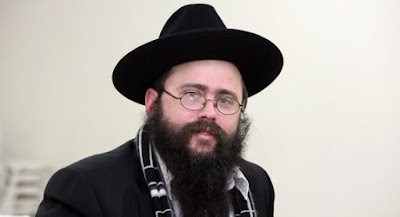 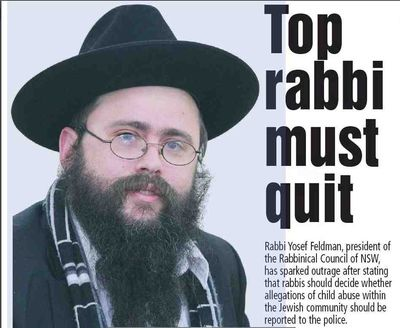 SYDNEY’S top rabbi has been urged to resign after he said it should be up to rabbis to decide whether allegations of child abuse should be reported to police.

In a series of emails that contradicted the recommendations from other rabbinical authorities around Australia in the wake of claims of abuse at Melbourne’s Yeshivah College, Rabbinical Council of NSW (RCNSW) president Rabbi Yosef Feldman outlined his views to fellow members of the rabbinate.

Among his assertions were that anyone who reported a paedophile would be responsible if the paedophile was raped in prison.

He also said abuse should be dealt with, when legally possible, outside the Australian legal system.

“I really don’t understand why as soon as something of serious loshon horo (evil talk) is heard about someone of even child molestation should we immediately go to the secular authorities (sic),” Rabbi Feldman wrote.

“One must go to a Rov (rabbi) who should firstly investigate the veracity of the complaint and if thought to be serious, warn the culprit etc. and act in a way that could scare him by threatening him with publicity by internet to the whole community.”

He added: “I personally feel that if we as a Jewish leadership can’t deal with this and other issues bifnim (internally) we are showing ourselves to be impotent …”

When contacted by The AJN this week, Rabbi Feldman didn’t back down. He said that if there is no legal obligation to report abuse and the rabbi believed the perpetrator would not reoffend, then there was no need to call the police.

“If there is a grey area then we have to look at the Jewish perspective and the human rights of the aggressor. It is not only the victim that he (the rabbi) has to think of, because in this case he also has to think of the attacker.”

In light of Rabbi Feldman’s emails, the president of the Organisation of Rabbis of Australasia (ORA) Rabbi Dovid Freilich told The AJN: “He is halachically wrong and the statement is abhorred. When it comes to molestation and child abuse, it is a mitzvah to go right to the authorities – 100 per cent. I personally would have resigned if I was a member of the NSW Rabbinical Council, to show my total disapproval of Rabbi Feldman’s sentiments.”

Manny Waks, the head of Canberra’s Jewish community, who alleged this month that he was a victim of sexual abuse at Yeshivah College in the early 1990s, described Rabbi Feldman’s comments as “immoral” and “unethical”.

“Contrary to what the rabbi says, there is no grey area in this case. There are victims and there are perpetrators.

“Rabbi Feldman should immediately clarify his remarks publicly, and if he still stands by them then his colleagues should ask him to tender his resignation immediately,” Waks said.

Adding his voice to the chorus of disapproval, the Sydney Beth Din’s Rabbi Moshe Gutnick said Rabbi Feldman was “out of touch with the view of society”.

“He is out of touch with the views of rabbinic Judaism. I dissociate myself with them as should every observant Jew,” Rabbi Gutnick said.

The RCNSW met on Tuesday morning to discuss the issue.

“One rabbi suggested that I should stand down,” Rabbi Feldman said. “He was not listened to and I had overwhelming support.”

The council did, however, express its unanimous adoption of a motion passed by the Rabbinical Council of Victoria condemning all forms of child abuse and affirming “its halachic position” that prohibitions of reporting such crimes to the civil authorities “do not apply in cases of abuse”.

In a statement, Rabbi Feldman said: “I would like to unequivocally publicise my support and encouragement of the adoption of that resolution within the NSW rabbinate and the wider Jewish community.”

However, on Wednesday he told The AJN: “My opinion is that we [rabbis] should determine if there was actual abuse, then call the police. The statement from the rabbinic council does not specify this and I believe it does not contradict my view.”

NSW Jewish Board of Deputies president Yair Miller said the email exchange was disturbing, but noted the RCNSW’s decision.

“It would be entirely unacceptable and unbefitting any rabbi, even in an abstract discussion, to canvass the theoretical possibility of not reporting allegations of serious criminality to the police,” he said. “What is more important, however, is that that possibility has been unanimously and unreservedly rejected by all members of that council.”

In a joint statement issued yesterday, ORA, the Melbourne Beth Din and the Sydney Beth Din said: “There is no halachic impediment to conveying all credible information regarding such matters to the police or relevant authorities, but to the contrary, it is halachically obligatory to do so.

“The obligation applies not only to mandatory reporters but to all who become aware that abuse is taking place.”
Posted by joe levin at 5:47 AM