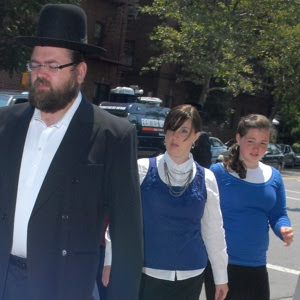 Leiby Kletzky had several narcotics in his system, including hydrocodone, the schizophrenia drug quetiapine, Tylenol and the muscle relaxant cyclobenzaprine, according to the city medical examiner's autopsy report.

Aron, 35, was slapped yesterday with two counts of first-degree murder, kidnapping and other charges by a Brooklyn grand jury. He faces a possible life sentence without parole if convicted.

"There was an intent to kill, and that's based on the ingestion of the medication," said Brooklyn DA Charles Hynes.

They were returning from a Rockland County wedding to which Aron bizarrely took Leiby after allegedly kidnapping him off a Brooklyn street that day.

"It gave me chills in my spine," said an attendant at the Sunoco station on the Palisades Parkway after looking at still images from the video, time-stamped 8:15 p.m. "I know the child is dead. It made me sad."

The footage shows Aron opening his car door for Leiby, and the two walking into the bathroom together.

"The pictures were just the kid and the guy walking behind him," the attendant said. "The man had a hat with glasses. The little boy was dressed like the way they described him when they were looking for him."

They were in the facility for only one to two minutes, said a second attendant who saw the video.

"There was no pushing, no nothing. The little kid goes easily," the second attendant said.

The footage then shows them leaving in a Honda, the second attendant said.

"It just looked like anyone else walking in and out. The child didn't look frightened," the first attendant said.

Later that night, they returned to Aron's attic apartment in Kensington.

The next day, June 12, Aron allegedly bound Leiby and left him "in a captive position" for 12 hours while he went to his plumbing-supply stockboy job.

"The boy had marks on his wrist that indicated at one point he was tied up," said Hynes, who added that Leiby's body showed no signs of sexual abuse.

Aron told cops he killed Leiby when he got home, in a "panic" over the intense search for the boy.

After allegedly smothering Leiby, Aron cut off his feet, placed them in garbage bags and put them in his freezer. He put the rest of the corpse in a suitcase he tossed in a garbage bin two miles away.

Aron was shirtless when cops stormed his apartment in the early hours of July 13. He led police to the body parts and fully confessed, police said.

But the NYPD said no other victims have been discovered.

"The only victim we are aware of is Leiby himself," said police spokesman Paul Browne.

Leiby stumbled into Aron on July 11, when he got lost after his parents let him walk alone from his Borough Park day camp for the first time.

Officials said that when Leiby asked Aron for directions, the predator instead drove off with the boy to the wedding.

The shocking new evidence was revealed hours after the Kletzky family walked a symbolic lap around their block to complete the traditional seven-day mourning period of shiva.
Posted by joe levin at 11:22 AM