To some of Israel's rich and famous, a rabbi serves as adviser, guru and miracle worker

In this Monday, July 11, 2011 photo, a man kisses the hand of Rabbi Yoshiyahu Pinto, center, as he attends a wedding in Lod, 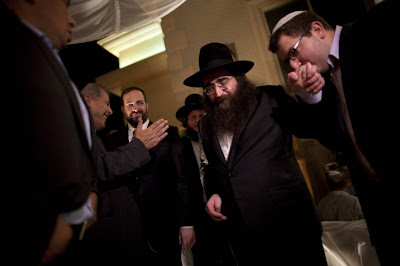 Ashdod, Israel - A few evenings every month, some of Israel’s wealthiest and most powerful people can be found in a living room in this seaside city, waiting to have a few minutes with a rabbi they see as an adviser, guru or miracle worker.

Yoshiyahu Pinto is slightly stooped, his long beard and hair unkempt. He looks older than his 38 years, and speaks so softly you have to lean in to hear him. His remarkable rise in recent years has turned this living room of floral-patterned chairs and gilt sofas into an intersection of influence extending to Israel’s parliament, where a former defense minister believes the rabbi helped him emerge from a coma, and to high finance, where a real estate broker says Pinto steered him away from a bad deal that would have lost him millions.

People come seeking the rabbi’s blessing or his counsel on their business deals and personal lives. Pinto has no business training and did not study at university. But he has “wisdom that is unlimited,” said Israeli businessman Ilan Ben-Dov, the majority shareholder in the cell phone company Partner, who has been consulting the rabbi regularly for five years.

“He has not only his own life experience, but that of all of the generations that went before him,” Ben-Dov said. “Any attempt to describe him falls short of the reality.”

The veneration of rabbis said to have miracle powers has a long history in Judaism, existing uncomfortably alongside a deeply rooted rationalist tradition. In Israel, the phenomenon used to be identified mainly with poor Jews of Middle Eastern origin. But in recent years, it has spread to the country’s secular elite, bringing into the limelight a number of rabbis who have an aura of otherworldliness as well as PR operations sophisticated enough to make sure their otherworldliness is well known.

On a recent Thursday night - one of the several times a month Pinto sees visitors here - an Associated Press reporter waiting for several hours for an audience was joined by millionaire businessmen, professional soccer players, a few seemingly ordinary people, and one of Israel’s most famous singers, a pop diva who goes by the name of Rita.

People who do not wait in line for anything wait in line for Pinto. Leaning against a wall, near the door to the rabbi’s office, was Jacky Ben-Zaken, the real-estate tycoon who told a reporter last year about Pinto’s last-minute advice to abandon his planned purchase of a company.

Tzipi Livni, the opposition leader, had been here two weeks before. Billionaire Nochi Dankner, who owns Israel’s largest holding company and a daily newspaper, is a regular.

Pinto is a scion of two rabbinical dynasties. On his mother’s side he is a great-grandson of a famous Moroccan-born mystic known as the Baba Sali.

Pinto began amassing followers as a young man in the Mediterranean port city of Ashdod, helped by his family heritage and reputation for uncanny insight into human behavior. Some of those followers saw him simply as an unusually wise man. Others believed his wisdom was supernatural, that his blessings had power and that he could see the future and heal the sick.

His fame slowly extended into the upper reaches of Israeli society, with the help of savvy assistants who cultivate celebrities and reporters.

The rabbi has a ministry, Shuva Israel, that funds Torah and charitable work and owns the rabbi’s house in Ashdod. It also has property in midtown Manhattan, where Pinto, apparently unhindered by the fact that he speaks no English, has developed a large following and where he now spends most of his time.

The rise of wonder-rabbis among the wealthy and influential here is linked to a more general rise in religious sentiment in Israel and to New Age trends, said psychologist and sociologist Yoram Bilu of Hebrew University in Jerusalem. A visit and donation to the rabbi offers an experience Bilu termed “instant redemption,” with none of the intellectual or practical demands of the actual religion.

Bilu ties it to the uncertainties of Israeli life: “Israeli businessmen operate in a very stressful, unpredictable environment, and the whole society is in a permanent state of emergency.”

Pinto stands out in part because he is more accessible to Israelis turned off by organized Judaism, said Shalom Yerushalmi, a veteran political analyst for the daily Maariv who considers himself one of the rabbi’s followers.

Unlike most ultra-Orthodox rabbis, Pinto does not press his secular adherents to observe Jewish law and rejects the mixing of religion and government, he said. Pinto has also spoken out to condemn racism against Arabs.

But not everything about the rabbi can be explained, said Yerushalmi: “I think he’s connected to places that we don’t even know about.”

Pinto came to his hospital room when he was comatose, said Ben-Eliezer, who is 74. “I didn’t see this, because I was almost in the next world. He sat next to me for between four and five hours, crying. Then he stood up and said to the people in the room - he’ll wake up tomorrow morning.”

And so it was.

When the rabbi showed up at an opulent wedding this month, his name was whispered like that of a rock star among the upper-class Israelis in the hall. One man asked him about a potential investment in a 1,500-unit housing project outside Tel Aviv.

After a long wait in Pinto’s living room, an assistant hurried a reporter into the rabbi’s office, past the envious glances of supplicants left outside.

The rabbi spoke softly and seemed distracted, as if he had just arrived from another world but was pleasantly surprised to be here.

When he spoke, it was in simple-sounding Hasidic parables interspersed with astonishing streams of name-dropping that encompassed politicians, businessmen and celebrities in Israel and the U.S.

The U.S. economy, Pinto predicted in an aside, “is on its way up.”

Asked why a millionaire might consult with him, Pinto replied with a story.

Once there was a king whose throat was sore. His advisers told him to drink oil, but this made things worse. Doctors told him to drink vinegar. This made it even worse. Then a simple old man suggested that he should just drink water, and of course this had been the solution all along.

“People create their problems,” Pinto said. “The rabbi’s job is to explain, with love, that these problems are only small things. People think these things are great, but they are not.”
Posted by joe levin at 10:46 PM