Friday morning a Chase Bank in Flushing, New York was robbed at gunpoint by a thug cops dubbed the "One Glove Bandit. 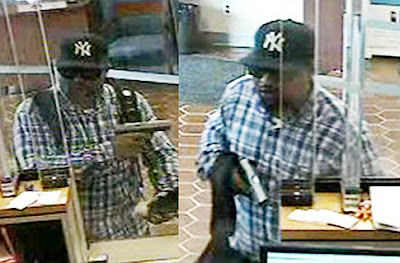 An armed bank robber who investigators have dubbed the "One Glove Bandit" knocked over a Queens bank Friday, the FBI said.

Clad in a Yankees cap and flashing a pistol, the bandit who is too slick for a second glove robbed a JPMorgan Chase bank on Main St. in Flushing about 9 a.m. He fled on foot with "a large amount of money," the FBI said.

It was his third heist.

In his previous heists, the bandit has hit the same Signature Bank on Broadway in Williamsburg, Brooklyn, the FBI said.

The robberies were on May 6 and July 1. Both times he wore a glove on only one of his hands - à la the late Michael Jackson.

Surveillance camera footage from yesterday's heist shows the bandit (photo) is a dark-skinned Latino, the FBI said. He is believed to be in his 30s, about 5-foot-8 and 200 pounds. He has light facial hair, the FBI said.

In yesterday's robbery, the bandit donned sunglasses and matched his blue Yankees hat to a blue-and-black plaid shirt.

The FBI is offering "a significant reward" for information leading to his capture. Call (212) 384-1000. All callers will remain anonymous.
Posted by joe levin at 9:40 PM