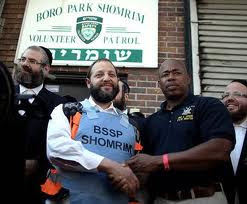 Two unsolved child abductions – one in 2007 and one in 2008 – appear to show that the haredi community's 'cooperation' with police is not at all what it seems.

Do Past Borough Park Child Abductions Show The Community Does Not Cooperate Fully With Police?

In 2007 and again in 2008 children were kidnapped and sexually assaulted in Borough Park.

The same perpetrator is believed to have carried out both attacks.

A well=placed source tells me the girls' families refused to cooperate with police, and that Yanky Mayer, known as a "fixer" for the haredi community with police and the Medical Examiner, was thought to be heavily involved in that decision.

The perpetrator was never apprehended and the cases remain unsolved.

A source also tells me that Yanky Daskal, Borough Park Shomrim's founder and head coordinator, recently admitted that he does not report suspected pedophiles or other suspected criminals to police, and that he only reports crimes he has seen with his own eyes – not crimes that victims or witnesses tell him about. Daskal considers it the victims' and witnesses' responsibility to do their own reporting to police.

That could mean that locals may have told Shomrim about Levi Aron's "fondness" for trying to lure young boys into his car, but those incidents were not reported to police by Shomrim.

It could also mean that Shomrim did not fully cooperate with police on the two child abductions and sexual assaults noted above.

When the 2007 attack was publicized, police did not give out Shomrim's hotline number. But Jewish sources did, including the Jewish Week (see below).

Sufficient evidence has convinced detectives working on the cases that the abductor is the same in both incidents.

The abduction in the summer of 2007 occurred on 52nd Street between 19th and 20th avenues at approximately 8:00PM. Apparently, the child was playing outside her home, when a man forced her into a vehicle and sped off. She was found on a street about two and half hours later, about 15 blocks from where she was abducted.

Parents are reminded to please be vigilant with your children. Do not leave them unattended even for one minute. If you see anything suspicious, call the police immediately.

The NYPD must be publicly commended for utilizing all resources available to link these two horrific crimes. Most notably is the dedication and devotion of Brooklyn South Chief Joseph Fox and his staff at PBBS – for doing everything they possibly can to secure the Boro Park community in the past two weeks. Chief Fox has personally been involved in this intense investigation, and has been in Boro Park countless times in the past few days assisting with the investigation.

The following statement has just been given to YWN by NYS Assemblyman Dov Hikind:

“I am deeply concerned about the two Borough Park abductions which have now been tied to the same assailant,” said Assemblyman Hikind (D-Brooklyn). “Already shaken by the recent assault, this will make residents even more anxious about the safety of our children. This is a community with a lot of children and they must be protected. The NYPD is to be commended for the significant resources they have committed to capturing this perpetrator.”

At 8:45 p.m. on August 3rd, an attacker forced a fourteen-year-old girl into a four-door black sedan, drove the victim to a secluded location. The teen fought with her attacker; he then drove on and left her at Fort Hamilton Parkway and 36th Street after midnight.

On July 16, 2007, a four-year-old girl was snatched from in front of her home and then dropped off 15 blocks from her Borough Park home. No one has been apprehended in that attack.

“We are urging witnesses to come forward; someone must have seen or heard something,” Hikind added. Anyone with information regarding the suspect should contact the New York Police Department Crime Stoppers hotline at 1-800-577-TIPS.

Hikind tells YWN that he has raised the reward to $20,000 [from its original $10,000] for information which leads to the arrest and conviction of the Boro Park “serial abductor” on the loose.

The largely Orthodox community of Borough Park was on high alert this week, and patrols by the 66th Precinct and the Shomrim civilian group in the Brooklyn neighborhood were increased, after a 4-year-old girl was abducted from a Borough Park street and sexually molested on Monday evening.

The Boro Park Shomrim, whose 150 volunteers patrol the area in cars and by foot around the clock, stepped up their activities this week, and sent out security alerts to residents, said Rabbi Jacob Daskal, coordinator.

In fliers and Internet notices, Shomrim urged parents to watch children, on summer vacation, who are playing outside, said Rabbi Daskal, who also serves as Shomrim coordinator with the police department. “We’re asking everybody to be more vigilant – if they see a car parked too long around children, give us a call.” (The Shomrim hotline number is [718] 871-6666.)

The 66th Precinct, which increased its street patrols this week, has established a Command Center on 52nd Street to monitor the situation, said Assemblyman Dov Hikind.

The abducted girl, who was playing outside her home, was grabbed by a man who shoved her into a car before exposing himself and fondling her, then leaving her in the nearby streets a few hours later, police said. They said they were looking for a white man driving a black vehicle.

“Ours is a community of children. People are very, very concerned,” Hikind told The Jewish Week Wednesday morning. He said this week’s incident came a little over a year after five attempted abductions of children in the same neighborhood.

“This is a wakeup call for everybody” to be more alert, he said. “You cannot let you child be unattended.”

Hikind said he will devote his talk show on WMCA radio, Saturday from 11 p.m. to midnight, to this topic.
Posted by joe levin at 3:13 PM

Email ThisBlogThis!Share to TwitterShare to FacebookShare to Pinterest
Labels: FailedMessiah.com