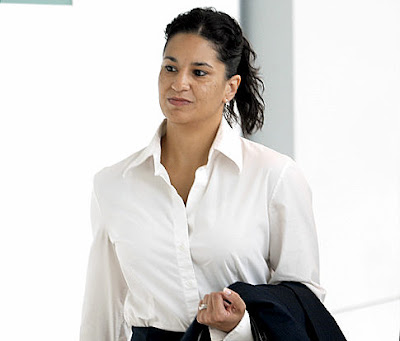 A cop who told investigators he was unfairly transferred for arresting a troubled Bronx prosecutor has gotten a favorable transfer closer to home, sources said.

Elliot Zinstein, who was shipped out of the 44th Precinct in the Bronx after arresting Assistant District Attorney Jennifer Troiano, was transferred Monday to the 33rd Precinct in Washington Heights, sources said.

Zinstein believed his original transfer to Brooklyn's 94th Precinct in January was punishment for not cutting Troiano a break during her Aug. 26 drunken-driving bust, sources said.

After Zinstein made his gripe clear to Internal Affairs investigators, a Personnel Bureau lieutenant told him the NYPD wanted to make amends - and would transfer him to the precinct of his choice to make up for the slight, sources said. Monday's transfer means Zinstein will be working closer to home, sources said.

"Troiano had a lot of friends in the department who probably would have cut her a break, but [Zinstein] did his job the right way," a law enforcement source said. "To his credit, he played it by the book. He should have never been punished for that."

Zinstein's troubles began when he arrested Troiano on the Major Deegan Expressway after she got into a three-car wreck.

Reeking of booze and wandering into traffic, Troiano "was stumbling and falling down and unable to keep her balance," court records show.

Troiano told Zinstein he should call Nestor Ferreiro, chief of narcotics in the Bronx district attorney's office. "He'll take care of this," sources quoted her as saying. "He took care of it the last time."

Zinstein made the arrest anyway, and Troiano was charged with DWI and reckless driving. The bust was Troiano's first, but she had twice skirted trouble behind the wheel before. One of the incidents ended with a DWI charge being voided by cops after a 2009 office Christmas party, sources said.

At the time of the August arrest, Zinstein was assigned to Operation Impact in the 44th Precinct in the Bronx. In January, sources said, Zinstein and about 40 other Impact cops were transferred - but Zinstein was the only one bounced from the Bronx.

Zinstein, an Orthodox Jew, was told the transfer happened because his new patrol area in Greenpoint needed more Jewish cops. He didn't buy that explanation because the Jewish population is much higher in the neighboring 90th Precinct in Williamsburg, sources said.

Zinstein, who has been on the force for three years, could not be reached for comment. The NYPD and Zinstein's union, the Patrolmen's Benevolent Association, declined to comment.
Posted by joe levin at 8:46 AM