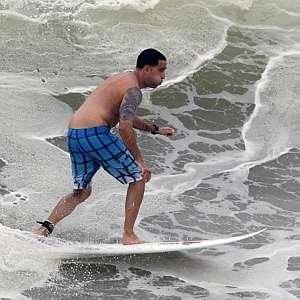 JAKARTA -- The body of Daniel Bobis, the surfer from Long Beach who disappeared in large swells off western Indonesia over the weekend, was found dead Thursday.

"We can confirm that his body was found today. We are still waiting for a full report on how he was found," an Indonesian search and rescue official said.

Fishermen found the body of Bobis, a 32-year-old teacher, Thursday morning in the waters off Sumatra island, according to the state-run Antara news agency.

The body was taken to a hospital for autopsy.

Chabad Rabbi Eli Goodman, director of the local BACH Jewish Center, had presided over an impromptu beachside memorial service Sunday not far from where Bobis first learned how to surf. His office said that he was comforting family members during this difficult time.
Posted by joe levin at 5:39 AM