New York subway fight: Not even a baby can get in the way of scrap between two women 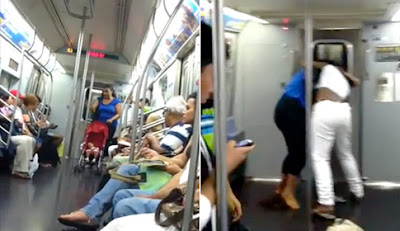 Nothing could get in the way of these two women and their beef - not even a baby.

Straphangers watched in disbelief as two passengers viciously attacked each other on an L train recently, as a baby stroller belonging to one of them rolled out the door onto the platform.

The fight, captured on a cell phone and posted on YouTube and Animal New York Tuesday, showed the duo having an argument over a seat which quickly turned ugly.

One of the women swung her bag over her shoulder, rocking the stroller back and forth with a sleeping child inside.

She appears to be getting ready to exit the train at the next stop when the verbal war of words turned physical.

As the women brawled and tore each other's hair out, passengers ran for cover and the stroller rolled out the doors.

The caption posted beneath the YouTube video says that other people at the scene took care of the baby until the fight was broken up.

Anyone with information about the subway brawl is asked to call Crime Stoppers at 1-800-577-TIPS
Posted by joe levin at 7:00 PM