26 AK-74 assault rifles, similar to the one shown, were stolen 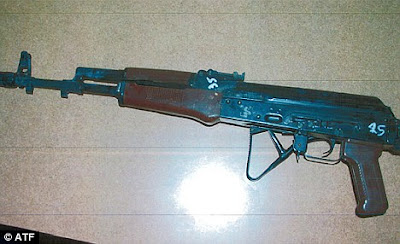 FORT IRWIN, Calif. More than two dozen assault rifles have been stolen from a Southern California military base, and investigators sought the public's help as they looked to arrest suspects and recover the weapons, federal officials said Friday.

Twenty-six AK-74 assault rifles and one Dragunov sniper rifle were stolen from a supply warehouse at Fort Irwin in San Bernardino County on July 15, the Bureau of Alcohol, Tobacco, Firearms and Explosives says in a statement.

Some arrests have been made and one rifle has been recovered, but the agency is offering a reward of up to $10,000 for information leading to further arrests, the statement said.

"Community participation is necessary to improve the likelihood that ATF and our law enforcement partners will track down the firearms as well as the criminals who have sought to destabilize our community through illegal activity," ATF Special Agent in Charge John A. Torres said in the statement.

ATF spokesman Special Agent Christian Hoffman could not say when reached by phone how many were arrested, whether they were military or civilian or what motive they may have had.

He referred those questions to military officials, who made the arrests. Phone and email messages left late Friday for a spokesman from the U.S. Army Criminal Investigations Command, which is investigating the theft along with the ATF and the FBI, were not immediately returned.

Hoffman also could not say why word of the theft did not become public for two weeks, but said his agency decided to issue a news release because of the potential danger the loose weapons posed.

"We determined that there was a public safety issue with the guns getting out on the street," he said.