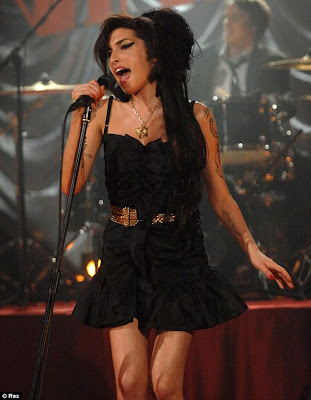 Police discover the body of the 27-year-old singer at her London apartment; death being treated as 'unexplained'.

Police found the body of a 27-year-old woman at a flat in Camden Square after being called by ambulance services around 1500 GMT.

They said they were treating the death as unexplained.

"Inquiries continue into the circumstances of the death at this early stage. It is being treated as unexplained," a police spokesman said.

Winehouse's record label Universal confirmed her death in a statement.

"We are deeply saddened at the sudden loss of such a gifted musician, artist and performer," the statement read. "Our prayers go out to Amy's family, friends and fans at this difficult time."

Police had cordoned off the leafy street outside Winehouse's home in Camden, where around 20 onlookers had already gathered along with media photographers and camera crew.

Winehouse was born on Sept. 14, 1983, to a Jewish family with a history of jazz musicians. She was discovered by soul singer Tyler James at the age of 16 and in 2003her debut album "Frank" was released, to general acclaim.

Her second album "Back to Black" was released in October 2006 and reached the No. 1 spot.

The "Back To Black" singer — whose meteoric rise to fame has been dogged by her well-documented struggles with drug addiction — was found by paramedics around 4 p.m. London time.

London cops are conducting an investigation.

Amy Winehouse died from a suspected drug overdose, Sky News reported, but at present police are treating her death as "unexplained," the broadcaster said.

The London Ambulance Service was called to her home in north London just after 4:00pm local time but medics were unable to save her life, saying she was "beyond help," according to Sky News.

"On arrival, officers found the body of a 27-year-old female who was pronounced dead at the scene," a police statement said.

"Inquiries continue as to the circumstances of the death. At this early stage it is being treated as unexplained. There have been no arrests in connection with this incident," Police Superintendent Raj Kohli told reporters outside her home.

"I am aware of reports suggesting that the death was a result of a suspected drugs overdose, but I would like to re-emphasize that no postmortem examination has yet taken place and it would be inappropriate to speculate on the cause of death," he added.

Winehouse's body was removed from her apartment late Saturday, where grieving fans gathered to leave tributes and flowers. An autopsy is expected to be conducted either Sunday or Monday.

Winehouse had last been seen publicly Wednesday at the iTunes festival in North London.

While she didn't sing, Winehouse staggered on stage and begged the crowd to buy her protege, 15-year-old Dianne Bromfield’s new album.

Last month she cancelled her European tour following a disastrous performance in Belgrade, Serbia where she gave an incoherent performance appearing disoriented and drunk.

Winehouse had a long history of substance abuse, including not only alcohol but heroin and cocaine. As recently as June she had to cancel a planned 12-stop European tour after appearing drunk and struggling to remember her own lyrics at the tour's first stop in Belgrade, Serbia.

Prior to beginning the tour, she spent a week at the Priory Clinic in London, which offers treatment for addiction problems.

"Everyone involved with Amy is shocked and devastated. Our thoughts are with her family and friends," a spokesman for the singer said.

Her father, Mitch Winehouse, a part-time singer himself, was en route back to London from New York Saturday, where he had traveled to perform at Manhattan's Blue Note Jazz Club.
Posted by joe levin at 9:46 PM