The NYPD released these images of a man they say assaulted officers while escaping arrest on July 24, 2011. 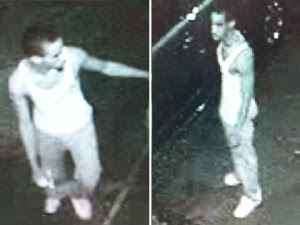 NEW YORK – The New York City Police Department is seeking a man they say assaulted an officer during an arrest early Sunday morning.

According to the NYPD, the suspect is 20-25 years old, 5’8″, thin and has a goatee. He was wearing blue jeans and a white tank top. The incident took place in front of 114 Christopher Street.

No word why the man was being arrested, although police released surveillance video of the incident.

In the video, the suspect can be seen wiping his hands on a cloth, which he stashes in his pocket. He then scratches his groin before turning to a parked pickup truck. While it’s not certain what he’s doing in the video next, it appears he is about to relieve himself against the pickup.

The video then jumps to two police officers attempting to arrest the man. The two officers stand behind him. As they begin to search him, the suspect bolts, but stumbles headlong into the gutter. Quickly regaining his feet, the suspect runs into the center of the street, where he falls into a tumble with the officers.

The police lay themselves on top of him, and grapple with him before shoving him over the hood of a parked car. The man rolls, and somehow manages to break free – apparently following a swift kick to one of the police officers. The suspect then runs down the street.

Police are asking for your help apprehending the suspect. Anyone with any information can: