Man Gets $1,000 Speeding Ticket Trying To Save His Baby

Rushing to save his baby's life, David Weber was issued a huge speeding ticket 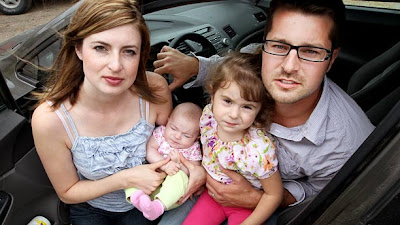 A man in Manitoba, Canada has been given a whopping $1,000 ticket and a suspended driver's license as punishment for speeding to the hospital in order to save the life of his pregnant wife and his unborn child, reported the Winnipeg Free Press.

David Weber and his wife Genevieve one day last March were on their way home from a day of shopping when she began to have contractions. Genevieve was 38 weeks pregnant and the couple knew, because of complications she incurred while giving birth to their first child, they had very little time to get her to the hospital for a Caesarean section.

In what is described as an adrenaline-filled panic, Mr. Weber mashed the gas pedal of his Honda Civic, and began speeding towards the hospital on "lightly trafficked roads," the newspaper reported, at more than 105 MPH.

Unfortunately, the couple flew right by a police officer.

The couple's first reaction was that of relief, thinking the officer would hear their situation and offer them an escort to the hospital. Forget it.

"[The officer] said, 'If you go to [the hospital], I don't want to see you guys speeding,'" David told the Winnipeg Free Press. "I was half-crying... I said, 'We don't have time for a lecture.' (I was) trying to save my wife and baby's life."

After a 15-minute delay, the Weber's were back on the road, but with a baby-gift of a $1,000 speeding ticket, and time running out.

Mr. Weber knew the delay had made it even more imperative that they get to the hospital, so he again mashed the gas pedal. But 30 minutes later, incredibly, the couple was stopped by another police officer who had actually been alerted by the first that the Webers might be speeding again in the direction of the hospital.

The second officer also ignored the situation, started another lecture on speeding, and called an ambulance instead of allowing Mr. Weber to continue to the hospital, or escorting him there. Genevieve suffered through yet another 15 minute delay in pain and agony as they waited for the ambulance to arrive.

Fortunately, the Weber's baby was born healthy at the hospital, but it was a dangerously close call. According to the couple's doctor, Genevieve's uterus was very nearly ruptured.

Mr. Weber decided to fight the ticket with the support of the doctor that delivered the couple's baby. But in spite of the doctor's testimony that speeding was absolutely necessary to save Mrs. Weber and her baby, the police refused to drop the ticket. They did, however, reduce the fine to $400.

And take a suspended license too!

Last month, Mr. Weber attended a hearing about the speeding incident, and in early July received even more appalling news: His license would be suspended for five months.

Only upon the completion of a safe-driving course will Mr. Weber be able to legally drive again. Even after his 5-month suspension is up, he'll also likely incur a heavy financial burden from higher auto insurance premiums.

Police officials would not comment to the Free Press on the situation due to privacy concerns, but maintained that protocols designed for keeping the roads safe were followed in this instance.

slack due to the obviously special circumstances surrounding his traffic violation. David told the Free Press that he has taken his situation to the media in the hopes of garnering public support.


For the time being, David Weber is left wondering what might have happened had he been delayed even longer. Perhaps a Canadian solicitor will show interest in the case and charge the police with endangering the lives of Mrs. Weber and her baby?

But the larger question is why the police were such sticklers for official procedure in the face of a medical emergency. Certainly, there are many officers who would react differently in the face of the same circumstances.
Posted by joe levin at 5:53 PM