Motorman on No. 5 train attacked by screaming man wielding a screwdriver 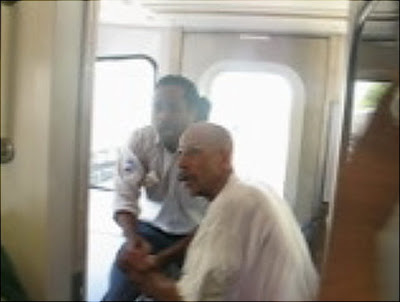 A man wielding a screwdriver and screaming someone wanted to kill him tried to hijack a subway train by forcing his way into a motorman's cab, cops, a witness and the motorman said Monday.

The terrifying 10-minute ordeal on a crowded northbound No. 5 train happened Friday and prompted panicked passengers to rush to the conductor's defense.

"I had some passengers helping me, so thank God for them," said motorman Darryl George, 36. "There are still good people in New York City."

Suspect Richard Arrocho, 42, is accused of entering George's front-car cab by climbing through its open side window from a wall alongside the tracks near the 149th St. station in the Bronx.

"I had opened my window to see what the situation was," George said. "He said someone with a gun was trying to kill him."

As George turned his back to radio a supervisor, Arrocho clambered inside.

"I was shocked," George said. "I couldn't believe it - he was inside my cab.

"He said, 'Move the train or I'm going to f-----g kill you,'" George added. "He wouldn't let me open the door. He pulled a screwdriver and tried to stab me.

"I started to move the train slowly," George added. "He pulled my hand off and pushed the control to make the train go faster. I told him, 'If we keep moving at this speed, we're going to hit something.' It didn't make any difference to him. "

"It was crazy," said witness Ronald Baker, 60, of the Bronx, who shot dramatic video of the 3:40 p.m. incident. "People were screaming, passengers were pounding on the [motorman's] door, trying to get the guy to put down his screwdriver."

Baker's video shows George wrestling with Arrocho and briefly getting the suspect in a headlock as the train rumbled down the tracks. The train stopped once it reached the Jackson Ave. station. George managed to open the door and run out, leaving Arrocho in the cab alone.

The video shows two passengers initially helping George try to keep the suspect locked in the cab. Apparently believing he might commandeer the controls, George and a passenger pushed open the door and attempted to get Arrocho to calm down.

Court records show Arrocho claimed someone was trying to kill him in retaliation for a previous robbery. When cops arrived at the Jackson Ave. station, Arrocho surrendered without incident.

"He may have seen 'Taking of Pelham 123' one too many times," said a law enforcement source, referring to the 2009 remake staring John Travolta as the hijacker of a No. 6 train in the Bronx.

The source said Arrocho has a history of mental illness and spent time in a psych ward. He was charged with felony attempted assault, menacing, harassment and criminal possession of a weapon - a pointy Phillips-head screwdriver. He was being held on $2,500 bail.

He has been arrested at least 40 times since 1985 on charges ranging from robbery to petty larceny, records show.

"I could have lost my life over this," George said. "You don't expect something like this to happen when you go to work."
Posted by joe levin at 7:33 AM