One Of Levy Aron’s Attorneys Quits 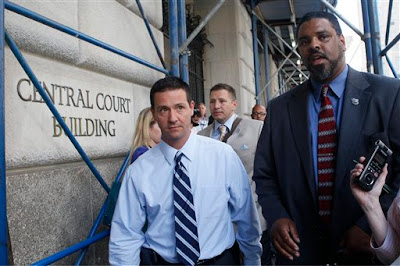 Defense co-counsel Gerard Marrone abruptly resigned from the case, telling Eyewitness News that he simply could not in good conscience continue to represent Aron, who is accused of abducting and murdering an 8-year-old Leiby Kletzky in Brooklyn.

“The allegations were too horrific, and it’s not something I wanted to be involved in,” he told Eyewitness News. “I have three boys. One of my sons is seven. I looked at my own children and there are no words. You see the victim and you feel so sad.”

Marrone admitted there was a time earlier this week when he cried over the death of Leiby Kletzky.

Marrone and his co-counsel Pierre Bazile suggested last week that Aron was schizophrenic and said they were considering an insanity defense.

Bazile sought to downplay that speculation this afternoon

“Reports in the press that a so-called ‘insanity defense’ is planned are premature,” he said in a statement. “Please refrain from publishing this erroneous information.”

People in the community we spoke with insisted that an insanity plea would be an injustice.
Posted by joe levin at 7:12 PM