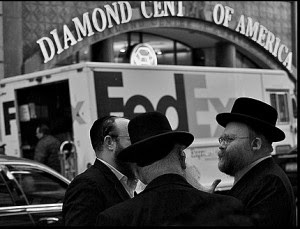 Officials from the 47th Street Business Improvement District, which represents the hundreds of diamond and jewelry retailers along the stretch, gathered at the Diamond Exchange Thursday to kick off a campaign to encourage same-sex couples to shop at their stores.

“We’re happy to welcome the LGBT community today,” BID Executive Director Michael Grumet told reporters before cutting a ceremonial cake to celebrate the unions, which officially become legal in the state on Sunday. “We’re happy to have you here.”

Grumet told DNAinfo he sees big potential for the 282 licensed dealers on the stretch.

Others, however, said that while they oppose gay marriage personally, they don't discriminate when it comes to business.

“I do not criticize, as long as they buy,” said Alex Michaels, 29, who works at A-Z Diamond Services and said that he’s sold many rings to same-sex couples over the past ten years.

While Michaels described himself as a "very religious" Jewish man who believes in the Bible — which he said bars gay marriage — he said that he’s happy to sell to anyone who walks through the door.

“Belief is different than business,” he said.

One 28-year from Queens who works in the wholesaling business and described himself as a "very religious" Jewish man said he believes same-sex unions are wrong, and said that "It's not the way it should be."

Still he, like many others, is happy to sell to anyone who'll buy.

“We see everyone like green,” he said, referring to the color of money. "Everyone is equal."

Others said they felt torn about the apparent contradiction.

“It’s hard,” said Landau Jacob, 52, who's worked as a diamond seller in the district for the past 30 years.

“The key is this: people are coming to buy. It’s not my business what they are," he said.

Officials from the BID said they have not received any negative feedback from members about the new campaign, which they hope will help everyone in the district.

“The most important thing here is everyone wants to sell and make money,” said Harvey Nagin, president of the BID's Board of Directors and a jeweler whose family has been in the business for the past 75 years.

Whether or not the bid works is yet to be seen.

Natasha Dillon, a founding member of the advocacy group Queer Rising, said she would never want to financially support retailers who believe her lifestyle is wrong, especially when there are so many other places to buy rings in the city.

She said that the group will be closely monitoring to make sure there are no reports of discrimination.

Meanwhile, in the district, some jewelers who applauded the plan have already been at work thinking about what rings might be most appropriate for displaying as “his and his” and “her and her” pairs.

Rosa Bababekov, who's worked at Klim Jewelry at the Diamond Exchange for 23 years, said that same-sex couples have been been buying rings at the store for a long time. She said that one of the benefits of shopping there is that all of the rings are made-to-order and can come in any size so that customers aren't limited along traditional gender lines.

And for those new to the market who may be considering an engagement ring for the first time, jewelers offered some advice.

Nagin said anyone new to the market should read the Jewelry Buyer's Bill of Rights and study up on the “Four C’s”: color, clarity, cut and carat size.

“What you want to buy is the whitest and the clearest quality, and the largest diamond you can afford. ... It’s not about the size, it’s about the quality,” he said.

Elana Smikun, 30, who's worked at Klim for a decade, said customers should also be sure they get a certificate with their diamond and said that GIA and EGL are the industry's best.

While some choose to save money by buying "clarity-enhanced diamonds" that have been laser-drilled and treated to improve their look, staff said that customers should be aware that they may receive just 25 just cents on the dollar when they try to sell them back.

Couples were also warned that they should expect to spend significantly more than their mothers and fathers, and even brothers and sisters who may have gotten married two to three years ago, thanks to the rising price of gold and diamonds.

But Manhattan Borough President Scott Stringer encouraged couples to fight for the lowest prices possible at the event.

“You handle, you negotiate, you get a good diamond, you get your spouse very happy," he said.
Posted by joe levin at 6:16 PM

Email ThisBlogThis!Share to TwitterShare to FacebookShare to Pinterest
Labels: By Jill Colvin, DNAinfo