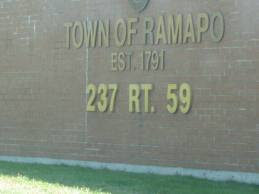 A state appeals panel has temporarily blocked a justice's order holding Ramapo and its Planning Board in contempt concerning a yeshiva's Kiryas Radin adult student housing complex on Grandview Avenue.

The case, while increasing the town's legal costs in the 7-year-old dispute to more than $1 million, focuses on the Planning Board ignoring a state justice's order to conduct a complete environmental impact statement. A second issue centered on the board legalizing illegal occupancies.

Municipalities usually get automatic stays when it comes to such orders pending their appeals, Ramapo Town Attorney Michael Klein said.

The case involves Mosdos Chofetz Chaim's 12 buildings with 60 apartments and a religious study center on 4.7 acres outside New Hempstead.

The legal action by the villages of Chestnut Ridge, Montebello, Wesley Hills and Pomona against Mosdos Chofetz Chaim's project, the Ramapo Planning Board, and Ramapo goes back to 2004.

Since 2004, Ramapo has spent close to $1 million defending its adult student housing zone and subsequent appeals of Nicolai's decisions on environmental and contempt issues.

Appealing Nicolai's decisions has cost $211,432 alone in the last two years. The latest appeal will add to the cost.

The case started after the Town Board created adult student housing zones bordering the villages, though applicants already had the ability to seek student housing projects.

But Nicolai found the Planning Board should have ordered Mosdos Chofetz Chaim to study its project's impact on traffic and character of the single-family neighborhood.

Klein and other Ramapo town attorneys told the Planning Board that Nicolai ordered the study. The board changed its position several times on the study.

Earlier this year, the board members accepted a view that Nicolai gave them a choice on whether or not to order the study. That view came from lawyers for Mosdos Chofetz Chaim and the planning board's lawyers.

He said he supported the yeshiva's position that it had provided the Planning Board with information on the impact on traffic and the character of the neighborhood.

Ramapo building and fire inspectors and attorneys for the villages also had convinced Nicolai this year that the yeshiva filled at least 22 of 40 other apartments in violation of town regulations and his orders.

The Planning Board gave the project final approvals, legalizing the supposedly illegal units.

In issuing his June contempt order, Nicolai wrote that the Planning Board's "issuance of final approvals was in 'knowing and willful' violation" of his order, and "willfully disregarded the clear legal mandates of the court."

Nicolai gave Ramapo 45 days to nullify all final approvals for the yeshiva's housing project and evict all tenants, except for 16 families approved by the court and Ramapo.

The appellate decision cancelled a hearing Friday before Nicolai on forcing the town and the yeshiva to pay legal fees of the villages.

Zaks long denied the allegations of leasing to other tenants, accusing inspectors and town lawyers of singling out his yeshiva on religious grounds.

The yeshiva earlier filed for bankruptcy protection, citing debts of $16.4 million. Zaks wrote that the bankruptcy also was filed to prevent Nicolai from dealing with contempt requests.

A federal Bankruptcy Court trustee has called for the case to be dismissed.
Posted by joe levin at 5:37 AM