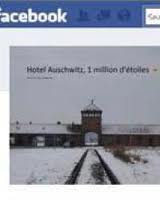 Facebook has refused to remove pages where internet users espouse Holocaust denial despite a plea from a group of Holocaust survivors.

Earlier this month 21 survivors of Nazi persecution signed a letter which was sent to Facebook, asking that Holocaust denial no longer be allowed as part of facebook's "free speech" policy.

The signatories described pages where users openly questioned what the Nazis did as "shameless, cynical and hateful propaganda".

The letter said: "As individuals who are both victims of and witnesses to the truth of the horrors and hate of that time period, we are deeply hurt and offended by your policy that protects Holocaust denial as speech.

"Above all else, Holocaust denial, in any form, is a desecration of our suffering the suffering and martyrdom of our murdered parents, brothers and sisters."

They said allowing such hate-propaganda on the social networking site enabled Holocaust deniers to preach their inherent message of lies and hate and called on Facebook "to live up to its moral and social responsibilities".

They said that if Facebook – founded by Jewish Harvard student Mark Zuckerberg in 2004 - did not take action, it would be "exposing the public and, in particular, youth to the antisemitism which fueled the Holocaust.

"Please correct this terrible error in judgment before our generation passes away."

However Facebook, who have previously been reluctant to challenge anti-Israel pages on the site, said they would not fulfil the request.

"We think it's important to maintain consistency in our policies, which don't generally prohibit people from making statements about historical events," said a Facebook spokesman. "No matter how ignorant the statement or how awful the event."
Posted by joe levin at 7:48 PM