New York Yankees' Hideki Irabu during the first inning of game against the New York Mets. 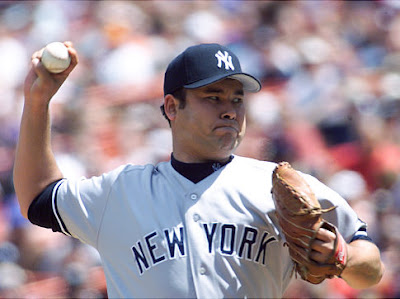 Former Yankees pitcher Hideki Irabu, a hard-throwing righthander touted as a superstar when he arrived in New York from Japan, was found dead in his Rancho Palos Verdes, Calif. home Thursday, according to the team.

Multiple reports indicate that police are investigating the death as a suicide, although those reports were unconfirmed as of Thursday afternoon.

Irabu had been arrested twice in the past three years, once for drunk driving in California and another time for assaulting a bartender in Japan.

Irabu began his professional baseball career in 1988 in the Nippon Baseball League in Japan. In 1997, Irabu grabbed headlines when the Padres purchased his rights from the Chiba Lotte Marines, and was considered one of Japan's top pitchers.

Irabu, however, refused to sign with the Padres, saying he would only play for the Yankees. The Padres and Yankees eventually made a trade to grant New York rights to the Japanese pitcher, and Irabu was signed to a four-year, $12.8 million contract. He had established himself in Japan after recording the highest velocity (98 mph) on his fastball in Nippon League history.

Bobby Valentine, who managed Irabu in Japan, at the time said prophetically: "I'm glad he signed, but boy, I don't think it's gonna be good for the young lad. It's not a good situation. I just have a feeling."

Irabu struck out nine Detroit Tigers over 6 2/3 innings in his major league debut, but his career in the United States went downhill, for the most part, from there. On April Fools' Day 1999, after failing to cover first base in a spring training game on a ground ball to the right side of the infield, Steinbrenner famously called him a "fat pussy toad."
Posted by joe levin at 5:04 PM