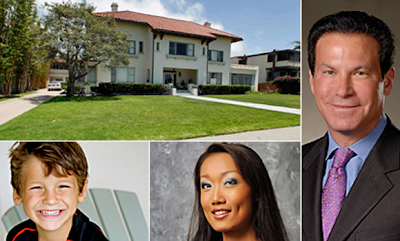 Authorities have cautioned that sorting out two unusual deaths at the historic Spreckels mansion in Coronado could take weeks. But the national media attention has put the owner of the home, 54-year-old pharmaceutical executive Jonah Shacknai, in the spotlight.

Shacknai's 6-year-old son, Max, was rushed to the hospital on July 11 after he fell down a staircase inside the Ocean Boulevard mansion.

Two days later, the body of Shacknai's 32-year-old girlfriend, Rebecca Zahau, was found naked, her hands and feet bound, hanging by the neck from a balcony in the courtyard of the 27-room estate. First-responders tried to revive her, but she was pronounced dead.

Max Shacknai died four days later in the hospital; his parents had kept a vigil by his side.

Many close to Jonah Shacknai describe him as a man who cared for his children, was engaged in his community and had gained the admiration of friends and associates, many of whom were eager to come to his defense.

"He's a good friend. He's dedicated to his family," said Denise D. Resnik, who has known Shacknai for more than a decade from their work on the Southwest Autism Research & Resource Center, an organization to benefit families affected by autism. He cared deeply for Zahau, she said.

"It's tragic from every dimension," Resnik said.

Nearly 10 years ago, when Jonah Shacknai and his first wife were in the middle of a hard-fought divorce, his estranged wife was clear about one thing: The driven business executive may have been a poor husband, but he was a devoted father. The couple have a daughter, 14, and son, 13.

The chairman and chief executive of Medicis Pharmaceutical Corp. spent long hours at work, she said. During their honeymoon he'd asked his wife whether he had made a mistake, according to court records. A psychologist who evaluated the couple during the divorce to help determine custody said he thought Shacknai had been defensive and might have had some unresolved anger issues.

But, wrote the psychologist, "It was quite apparent to me that his children are most important to him and he loves them dearly."
Posted by joe levin at 5:28 AM