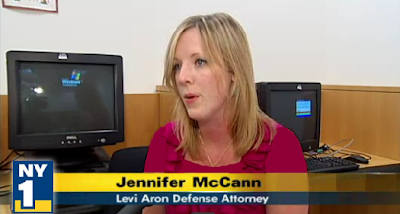 The new lawyer for the man accused of killing and dismembering an eight-year-old Brooklyn boy talked to reporters for the first time Tuesday.

Another lawyer stepped down, saying the details of the crime were too much to handle, but McCann says her client is innocent until proven guilty.

“I understand people are outraged by what is a horrific, horrific crime, and they believe they found who's guilty and they believe he should be punished and they don't appreciate anyone who wants to spend his rights,” said McCann. “But this isn't a country where we believe in shooting galleries and lynch mobs.”

Police later found the boy's remains in Aron's home and in a dumpster in Sunset Park.

Aron is charged with murder and kidnapping.

He pleaded not guilty.
Posted by joe levin at 4:57 AM