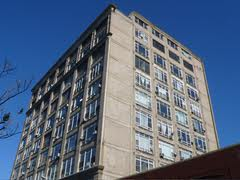 A raiding party of 60 agents from several government agencies descended yesterday on a former matzoh factory and warehouse in Brooklyn to gather evidence that it was converted illegally to residential lofts.

Tenants said firefighters used force to enter the offices of Nachman Brach, owner of the 11-story building at 475 Kent Ave. in Williamsburg.

Building inspectors went floor to floor checking apartments and shut down the elevator out of safety concerns.

"There was a big ladder truck and 30 cars out front," said resident Sy Craft, 36

"They had battering rams and broke into Nachman's office with the 'Jaws of Life.' They popped every door on every floor."

The raid was led by the Brooklyn DA's Office.

Three years ago, authorities ordered the entire building emptied for more than three months until emergency sprinklers could be installed.

Probers in 2008 had determined there was a danger from combustible grain silos that were part of the illegal matzoh factory.

No one was evicted in yesterday's raid
Posted by joe levin at 6:53 AM