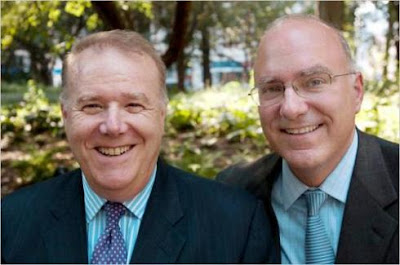 The mayor of New York was among the guests who watched a glass smashed under the chuppah at one of the state's first ever same-sex marriages.

New York became the sixth US state to legalise gay marriage in June, and the law came into effect on Sunday.

Mayor Michael Bloomberg, a champion of gay marriage, conducted a ceremony for a Jewish couple at his Upper East Side residence.

The happy couple - John Feinblatt and Jonathan Mintz – have both worked at City Hall for several years. Their two daughters cheered as the glass was smashed.

Mr Bloomberg said he was delighted the day had finally arrived. He told the couple: "Today, surrounded by family and friends, you are making history."

A group of Orthodox Jewish protesters, among the many people who opposed the law change, gathered nearby with signs to show that they did not agree.
Posted by joe levin at 10:32 AM