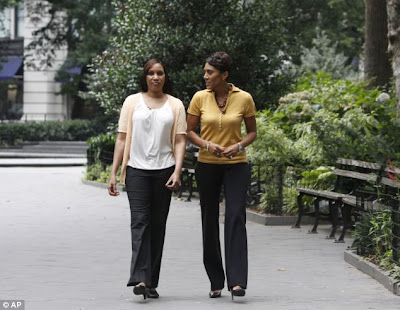 The New York City hotel maid who alleges she was sexually assaulted by former IMF chief Dominique Strauss-Kahn is going public with her story, preparing a media blitz that will begin Monday.

Newsweek today published an online version of its interview with Nafissatou Diallo, 32, in which the maid details how Strauss-Kahn forcibly made her perform oral sex.

"You're beautiful," she claimed the French politician told her, as he wrestled her toward the bedroom in the Sofitel suite she came to clean. "I said, 'Sir, stop this. I don't want to lose my job.'"

"I don’t look at him. I was so afraid. I didn’t expect anyone in the room.”

Diallo went on to describe the way Strauss-Kahn, 62, violently handled her -- clutching at her breasts, pulling her "hard to the bed," and tearing down her pantyhose to grab at her crotch.

After he allegedly forced her to perform oral sex, the maid said, "I was spitting. I run. I run out of there. I don't turn back. I run to the hallway. I was so nervous; I was so scared. I didn't want to lose my job."

An exclusive televised interview with Diallo will air on ABC's "Good Morning America" and on "Nightline" Monday -- the same day the maid's cover-story interview with Newsweek is to hit stands.

Strauss-Kahn's lawyers denounced Diallo's move to speak to the media.

"This conduct by lawyers is unprofessional and it violates fundamental rules of professional conduct for lawyers," Strauss-Kahn's lawyers said in a statement, according to AFP. "Its obvious purpose is to inflame public opinion against a defendant in a pending criminal case."

DNA evidence in traces of the maid's saliva mixed with Strauss-Kahn's semen indicates that there was a sexual encounter between them at the hotel on May 14. The politician's lawyers have suggested that the sex was consensual, and have said the case against him has largely crumbled amid doubts over the maid's credibility.

Strauss-Kahn, who is currently on bail, has pleaded not guilty to the seven charges against him, including attempted rape.

His arrest as he prepared to depart on a flight for Paris has generated headlines and debate around the world, cost him his job at the helm of the IMF and has apparently dashed his hopes for a run at the French presidency.