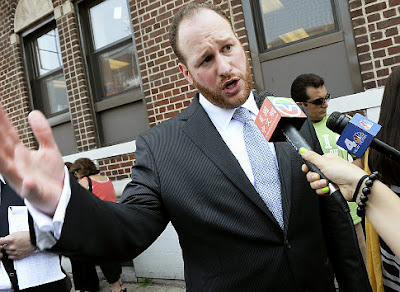 Hoping no child will ever mistakenly approach a monster for help again, city lawmakers want to create safe havens for lost kids.

Brooklyn Councilman David Greenfield is proposing "Leiby's Law," under which businesses could volunteer to be designated as safe places for children who are lost or otherwise in trouble.

Employees would undergo background checks and business owners would put a green sticker in their store windows so children know it's a safe place to get help.

Lawmakers and community leaders gathered to tout the idea on the street in Borough Park where where 8-year-old Leiby Kletzky was last seen alive.

"We are hopeful and optimistic that thousands will sign up," Greenfield said.

"Everybody should be involved in the community," said Adam Nussbaum, 41, owner of What A Deal! toystore on 13th Avenue, a block from Kletsky's day camp.

Nussbaum said he often has kids come into the store after being separated from their families.

"They call the parents and we give them a toy to play with while they wait," he said.

"It would be a pleasure to be a part of it," said Faigy Lebovich, owner of Kosher Candy Man on 13th Avenue and 47th Street.

Becoming a safe haven won't be a simple process. It would require storeowners and their employees go through a series of background checks and fingerprinting.

"I'm not sure if everyone will want to do the background checks. But being in a store is safer than being in the street."

The legislation won't be presented until the end of August and could take three to six months to go into effect.

Homeowners could sign up to go through the same criminal background checks and get the same safe haven designation.

"I will definitely participate in this," said Anna Cali, 47, a teacher at St. Athanasius in Bensonhurst who has teenage kids. "I think I would rather my kids go into a store than a home though."
Posted by joe levin at 7:31 AM