Members of the community gather to clean up graffiti spray painted on the Traditional Congregation of Mount Dora synagogue on Saturday, July 9, 2011 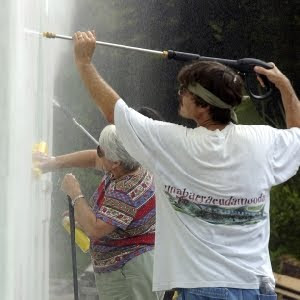 Hate does not represent the city of Mount Dora.

That's what residents of various denominations, races and ages set out to prove after discovering early Saturday that vandals had spray-painted anti-Semitic graffiti, hate messages and symbols on the grounds of the new Traditional Congregation of Mount Dora synagogue.

But less than two hours after the sun revealed "Hail Satan" and profane messages painted on the synagogue, wire brushes, paint remover, bleach, pressure washers and other items filled the hands of more than two dozen volunteers, prominent residents and passers-by trying to scrub away the graffiti.

"We want to show what truly represents Mount Dora," said city Councilman Vasco Watters, in jeans and using a pressure washer to remove graffiti from the driveway.

The vandals spray-painted hate messages on the white, multi-column, 7,700-square-foot sanctuary building, another structure and driveway of the synagogue, sometime between Friday night and before 7 a.m. Saturday.

Police consider the vandalism of the synagogue a hate crime.

The police department, which doesn't have a forensic unit, called in the Lake County Sheriff's Office's CSI unit to help process the scene. By noon, police had moved a giant electronic billboard in front of the building, asking for help in finding the vandals, with a phone number to call.

"We consider this a serious crime," Bell said.

Bell said he suspects teens, but added it wasn't clear who the culprits are.

Located in the 800 block of North Donnelly Street, the building used to house Link Stationery & Printing Co. and a couple other businesses before it recently closed down.

Synagogue members, who have been meeting in hotels and other places, decided to renovate the building due to a growing congregation.

The synagogue was scheduled to open for occupancy in two weeks, and a grand opening was to be set sometime in September, to run concurrent with a Jewish art exhibition in a city museum.

"The opening was pretty well known and had sparked a lot of interest," said Deana Goldstein, part of the congregation for more than two years and who's on the building committee.

The discovery of the vandalized synagogue was made by a man walking pass the building just before 7 a.m. Saturday, who reported it to the police.

Residents who came out to help said they were shocked at the graffiti, which included "Let's see God clean this," painted in red.

"It's stupidity and shame at best and bigotry and hate at worst," said Jane Brown, a member of First Presbyterian Church of Mount Dora, who took part in the clean-up.

Goldstein said Rabbi Chayyim Solomon and the synagogue's congregation on Saturday were honoring the Sabbath, a day that prevents members from working.

But in sporadic downpours of rain, Brown and her pastor were on hand for the clean-up as well as Mayor Melissa "Mel" DeMarco and students from Mount Dora High School, the latter trying to add hours onto their community service.

One woman with two children walking pass, decided to help. Yada Yada Pottery, which sits next door, served pizza for the volunteers.

DeMarco, wearing a T-shirt, said she was proud of the city coming together on such short notice to clean up. She said hate is not typical of the city.

"This is what Mount Dora is proud of," she said, looking at the volunteers clean the building.

Synagogue representatives said they hope to have the graffiti scraped off and painted over in two weeks.