New York Rabbi caught having sex with a prostitute.

Rabbi Avraham Rabinowich (inset) is allegedly filmed with a hooker and an investigator, according to a suit by his ex-wife, Amora. 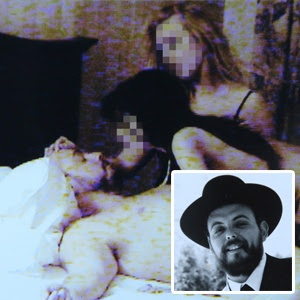 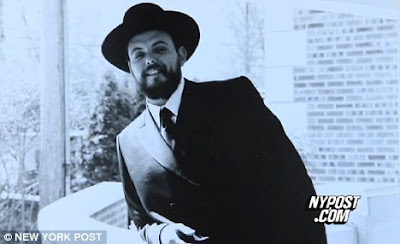 A prominent Long Island Jewish leader was caught with his dreidel out in a string of sordid sex tapes, according to sensational Manhattan court records.

Rabbi Avraham Rabinowich -- who leads the wealthy, Conservative Bellmore Jewish Center and is vice president of the Long Island Board of Rabbis -- allegedly made appointments with prostitutes on the Sabbath shortly after services.

He was then caught on camera in a hotel room enjoying some hard-core, commandment-breaking action, according to blockbuster court papers filed in state Supreme Court in Manhattan.

The holy man's estranged wife, Amora, a respected psychologist, got wind of the tawdry tricks while they were going through a bitter custody battle, she said.

She managed to have Rabinowich secretly filmed with a call girl and entered the photographic evidence into the record of the bitter custody case.

"Since when are prostitutes kosher?" Amora Rabinowich told The Post. "He was coming to court claiming he was this pious individual, but he was using the phone on the Sabbath to meet prostitutes.

"And what kind of rabbi is he? He didn't even take these prostitutes to the mikvah [Jewish ritual cleansing bath] first.

"What is he doing, praying or laying?"

Rabbi Rabinowich responded to the shocking claims by saying only, "I have no response. Have a nice day."

His lawyer, Jeffrey Lewisohn, called the wife's discovery a "setup" and downplayed the matter, saying, "It doesn't matter, this was five or six years ago."

Malcolm Taub, a former lawyer for the rabbi, blasted Amora, saying, "This is a very sick woman . . . This man has gone through hell with this woman."

According to papers filed by Amora, the rabbi wound up arranging a romp through a madam who really was one of his wife's private eyes.

"I am tall and nice-looking, don't worry, I'm OK," Rabinowich allegedly told the investigator at one point.

He was eventually filmed with the hooker at the low-rent Pam Am Hotel in Queens on March 18, 2006, the court papers claimed. A second woman in the photo was the private eye, Amora Rabinowich said.

"He needs help, serious help, to be a healthy individual and to be a proper role model to both the children and the community," she said.

A judge decided that the video was not relevant to the case, and the couple were granted joint custody of their three boys earlier this year.

"It was set up by her investigators. This was something the mother contrived," Lewisohn said. "If you're not doing something relevant in front of the children, it doesn't have an impact on the judge's decision."

Long Island rabbi Avraham Rabinowich, who is even alleged to have hired prostitutes on Shabbat – after services - was secretly filmed by a private investigator. The investigator had been hired by his wife Dr Amora Rachelle during a custody fight.

The father-of-three is the vice president of the Long Island Board of Rabbis and a highly respected rabbi in New York's Masorti Jewish community.

The case dates back to 2006, when the rabbi was filmed in a hotel room with two women.

Dr Rachelle, who said "since when are prostitutes kosher?", also told the New York Post that she was particularly angered by her supposedly pious husband's failure to take the women to a mikvah (ritual bath).

The case continues at the Manhattan state Supreme Court.
Posted by joe levin at 7:21 AM