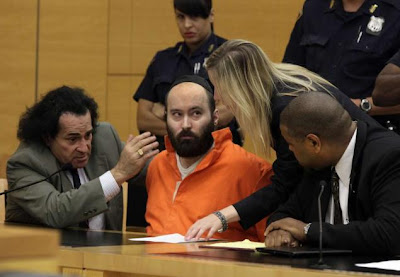 NEW YORK -- The man who admitted to kidnapping, killing and dismembering an 8-year-old Orthodox Jewish boy from Brooklyn is facing a prison sentence of 40 years to life in prison.


Levi Aron is expected to be sentenced Wednesday. He pleaded guilty earlier this month in the death of 8-year-old Leiby Kletzky.

The 36-year-old Aron admitted killing the child after the boy asked him for directions.

Leiby got lost on his way to day camp last July, the first time he had been allowed to walk alone. Aron took the boy upstate to Monsey, N.Y., where he attended a wedding before bringing Leiby to his apartment. When he noticed fliers with the boy's photo, he says he panicked, suffocated the boy and dismembered him.


Aron, a hardware store clerk, pleaded to lesser charges in a deal that spared him a criminal trial and the possibility of life in prison without parole.

Leiby was Hasidic, an ultra-Orthodox version of Judaism, and the killing shook the tight-knit community in Borough Park, a safe and somewhat insular neighborhood and home to one of the world's largest communities of Orthodox Jews outside Israel. Aron, who lived nearby, was Orthodox but not Hasidic.


Leiby got lost on his walk home from a religious day camp - it was the first time he was allowed to walk alone, and he was supposed to travel about seven blocks to meet his mother but missed his turn.


Just about 33 hours later, detectives found the boy's severed feet, wrapped in plastic, in Aron's freezer. A cutting board and three bloody carving knives were found in the refrigerator. The rest of the boy's body was discovered in bags inside a red suitcase in a trash bin about a mile from Aron's apartment. His legs had been cut from his torso.


The medical examiner's office said Leiby had been drugged then suffocated.