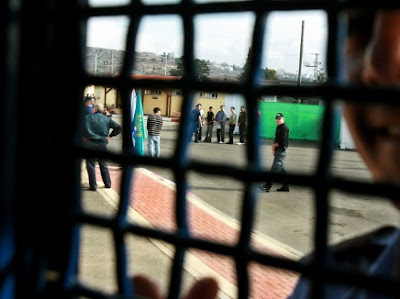 A young bride from Nachalas Har Chabad, married but one short month ago, was jailed in Israel and charged with defection from the IDF.


Mrs. D.L. Cohen and her husband were on their way to the airport en route to New York, when they stopped at the Army Police station in Kiryat Malachi to ensure that their documents were in order.

On the spot Mrs. Cohen was informed that she is a defector wanted by the IDF, and was sent to Prison #4. The couple was promised to have the case taken care of immediately, and that her short stay in prison was a mere formality.

The promise was not kept; the young woman spent the night in jail, and this morning the authorities informed her husband that she would be transferred to a courthouse in Jaffa in the near future.

The families have gotten several politicians involved in the case, including Knesset Member Dr. Michael Ben Ari.
This is a developing story. It will be updated as soon as new details become available.

Update: 11:49 PM: The young woman was transferred this afternoon to a courthouse in Jaffa, where she was supposed to have a quick and easy trial.

The judges were very tough on her and refused to allow for her release, ruling instead that she would remain in custody until Thursday when her trial will continue.

Update: Judges rule she will remain in custody until Thursday.
Posted by joe levin at 11:43 AM