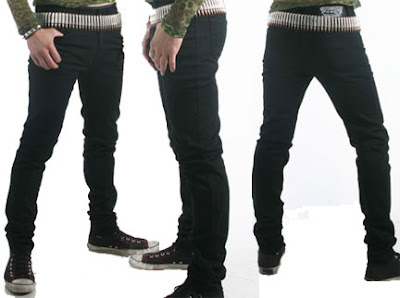 
"Every Jewish man is mandated by the holy Torah to dress modestly in loose-fitting clothing," read the edict, which was published in the ultra-Orthodox media.
The public service messages were accompanied by pictures of Jewish men in times of old dressed in loose, gown-like attire.

The announcement is an unusual one, considering that modesty edicts purveyed by zealous rabbis largely tend to target women.

Readers of websites that cater to the ultra-religious public, including Hadrei Haredim and Kikar Hashabat, appeared troubled by the fact that the tables have turned; some pondered exactly which Jewish laws pertain to the male dress code, while one commenter said: "A king's son is glorious within," a play on the Tehilim verse that exults the women's inner character over outward duds.
Posted by joe levin at 4:54 AM